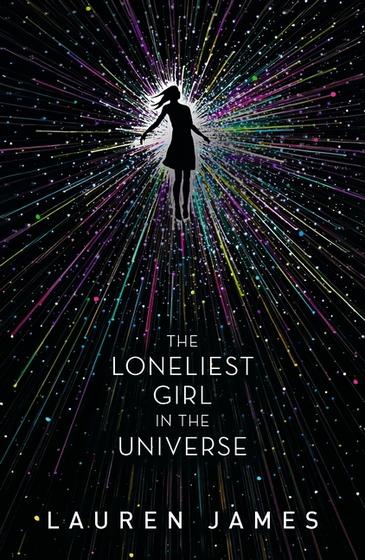 Can you fall in love with someone you’ve never met, never even spoken to – someone who is light years away?

Romy Silvers is the only surviving crew-member of a spaceship travelling to a new planet, on a mission to establish a second home for humanity amongst the stars. Alone in space, she is the loneliest girl in the universe until she hears about a new ship which has launched from Earth – with a single passenger on board. A boy called J.

Their only communication with each other is via email – and due to the distance between them, their messages take months to transmit across space. And yet Romy finds herself falling in love. But what does Romy really know about J? And what do the mysterious messages which have started arriving from Earth really mean? Sometimes, there’s something worse than being alone . . .

The telling of Loneliest Girl switches between the emails being sent back and forth between Romy and NASA, and then J; and the first-person journaling of Romy herself.  She seems like a fairly typical teenager, who has been through some unknowable trauma, flying towards some unknown destiny on a distant planet.

The book is well-written and certainly engaging, we get a sense of the coldness of space and the isolation that Romy feels.  I confess I was hoping for a little more philosophical depth… it was a little disappointing that for about 50-70% of the book, Romy does absolutely nothing except mope around her spaceship, writing soppy fanfiction and swooning over a boy.  I was hoping for an adventure story with a strong female lead, and yet she becomes so besotted with J she changes herself to impress him, does out of character things and feels she is completely dependent upon him – even though she single-handedly keeps a starship running.  For a large portion of the book, I didn’t feel that Romy was the strong lead we were looking for.

I’m aware that I am probably not the target audience for the book and so it is far less likely to appeal to me than it would to a much different demographic.  And maybe a girl who has spent most of her life completely alone on a spacecraft and has had no peer interaction since the onset of early adulthood would react in just this exact manner… but something about it just didn’t sit right with me.

Having said that, however, once things do start happening the end of the book is actually quite exciting… leaving aside the fact that Romy, having lived her whole life in space, probably wouldn’t have survived the story’s climax due to having pretty  much no bone density whatsoever, it did read as quite a good “space thriller” at the finale.  It took way too long to get to that point, but there’s some well written action at the end.