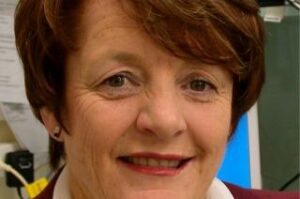 Libby Gleeson was awarded the CBCA’s Nan Chauncy Award, created to honour individuals who have made an outstanding contribution to the field of Australian Children’s literature, in a reception at the Baillieu Libray, Melbourne University on Friday 21 August.  In her thank you speech she celebrated Nan Chauncy’s legacy and spoke about the state of support for Australian Children’s Literature, and literature in general, in Australia today…

Thank you all very much for this award – truly today has been pretty amazing for me and I want you all to know how happy I feel.

There are a few things I want to say in receiving this.

The first is to join with you all in celebrating Nan Chauncy, in honouring her for her contribution to the form of literature on which we place great value. She was out there, writing about subjects that few, if any Australian children’s writers had attempted.

In his introduction to the Text Classic publication of her They Found A Cave, John Marsden pointed out that, in an era of the gentility of Enid Blyton and Nancy Drew, Nan Chauncy wrote of the battler, the isolated and ill educated, in a formal sense. They Found a Cave was my favourite of hers. As a kid I loved the daring and the adventure of running away and hiding out away from family. The character Tas was charismatic and bush skilled.  As an adult I can see how radical she was, writing of children leaving parents who were appalling. Not till Roald Dahl would such permission be given to the young – and in Matilda we see the Wormwoods as caricature parents. The Pinners in Nan’s work were real.

She wrote too of conservation before the real urgency of that movement became what it is today.

All her work is powerful social realism and I’ve been set thinking whether my first novel Eleanor, Elizabeth with its cave owes something to Nan’s book.

I’d like to thank the CBCA for this award and those thanks, as I said this afternoon, go to everything that you all do. Without you, the writers, the illustrators and the publishers would struggle unaided to produce the books and to make others aware of them. 70 years is a long time for a volunteer organisation to survive. We are, and have always been poor relations in the media and without the CBCA the task of generating recognition would be that much harder.

In the citation you have mentioned activities that I have been involved in and I would just like to say something about them.

In all that I do I believe I have stood on the shoulders of others.

I joined the ASA: the Australian Society of Authors, because I felt I needed to know other writers, and the situation we were in. I was never going to hibernate, alone, in a garret. I quickly realised that this was an organisation that helped writers – it had been set up by others in the nineteen sixties and if we think the arts now is an underfunded area of endeavour, look back to writers and their work then. They fought hard to get genuine Australian contracts off the British based publishers and in more recent years it helped establish the Copyright Council, the Copyright Agency and Public Lending Right.

I became Chair when we were deeply afraid of what the GST on books would bring and it was the fight hat we didn’t win. But I know that it was the fight waged by us, the ASA and the publishers and the printers that which lead to the compensation package, and that granted Educational Lending Right. That’s a payment for works in educational libraries. Because the greatest number of educational libraries is in schools, those who write for children and young people benefit, sometimes enormously.

That is a really significant part of the financial support that writers and illustrators receive.

There will be more battles the process of digital delivery and the implications for the library sector continue but my own energies have moved somewhat.

A pity in some ways because I feel the arts community needs hard working true believers right now. My writing career took off when I received assistance for my second novel from the Literature Board of the Australia Council. That organisation has been emasculated. We don’t know how available individual grants are going to be, if at all, and all we know of George Brandis’ plans for excellence in the arts is that there will be no individual grants given. And what is his National Book Council going to do?

Those of us in NSW have long envied the Centre for Youth Literature here in Melbourne, and The Literature Centre in Fremantle. Our attempts to have something similar in our state went unheeded but in the past few years a small project began in the Western Suburbs of Sydney. It was auspiced by Blacktown City Council and it aimed to serve the vast and diverse population of Western Sydney. Now it is an independent company with an energetic new Executive Director and ambitious plans for kids and young people and writers and illustrators. I am proud to be its Chair.

It is an honour to have been nominated for this prestigious award and to be receiving it from you, Belle, yourself a former recipient. I am so delighted to be joining others including Margaret Hamilton and my dear friend, the late Dr Maurice Saxby.

I consider myself such a lucky person doing what I do.

I love being a writer and being active in the world of books and writing – especially in that world for children.

Story leads us all to explore who we are and the whole world of possibilities out there. What I do in the writing and, I believe, in the activities, is all in the service of story.