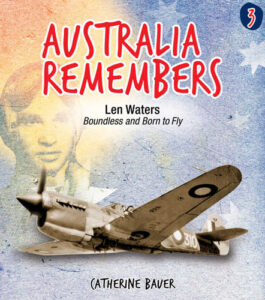 Len Waters (1924-1993) was a proud Kamilaroi man, raised in far northern New South Wales. He grew up at a time when Aboriginal people were barred from most public places, struggled to be educated, and were deprived of their lands and culture, often by Christian missionaries alongside government welfare departments. For most of Len’s life, Aboriginal families were under threat of having their children removed permanently, with all contact cut off. Despite these dispiriting conditions, Len Waters lived happily and dreamed of flying. His totem, the wedge tailed eagle, gave him hope. He was a brilliant country schoolboy, but when he turned thirteen the family could not afford to let him go further in his schooling. He went to work as a shearer.

World War Two gave him the opportunities usually denied to indigenous people. He enrolled in the air force at eighteen, describing himself on his enlistment form as of ‘pure European descent’. Possibly more than 8,000 indigenous people ‘faked’ their papers and registered to fight for Australia in this War. Even now, their contributions have not been fully acknowledged.

Beginning at the lowest rank, Len took every opportunity to advance his knowledge. He learned to put together the engine of a Tiger Moth biplane blindfolded, and eventually earned his wings as a Kittyhawk fighter pilot. He flew for over a hundred operational hours on 41 strikes against the Japanese in the Pacific War, rising to the rank of Warrant Officer. He was a hero in defence of our country, but at home he wasn’t recognised as a citizen. In fact, when he went to his local pub, in uniform, he was jailed for drinking without a racial ‘exemption’. He ended his working life returning to shearing.

This is a magnificent story of a man who lived generously, and without rancour or grudge, for a nation that used his talents, risked his life, and gave him no recognition. More lately, there are monuments, and there is even a Len Waters Building at the RAAF base in Williamstown, opened in 2020. It has taken too long.

Catherine Bauer has produced a book that gives full respect to Len Waters as an indigenous man, an Australian warrior, and a pioneering engineer-pilot. More than this, her story offers the wider context of the European War and the Pacific War, with information and statistics that will answer the questions of the most curious student, and open even more questions for groups and classes to discuss, research and build imaginative engagement with the issues raised.

The water-colour style illustrations by Nancy Bevington are dynamic and carefully accurate, while the many historical and archival photos and maps give the book immediacy and authenticity. The most beautiful and touching aspect of the book is the tone of the text, which makes clear the injustices perpetrated upon Len Waters, but at the same time conveys the always positive attitude he maintained for the good of himself, his people, and his chosen nation. This book is an excellent corrective to the usual stories of Australia’s war effort. Every school library needs this book.