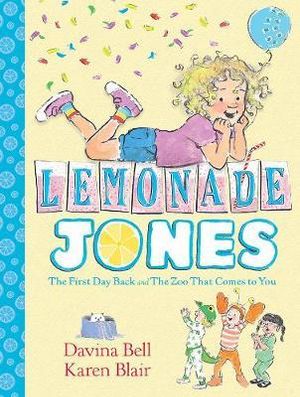 This first book in the series about Lemonade Jones consists of two stories. In the first story, titled “The first day back”, we meet Lemonade as she is starting year one at a new school. Despite her confidence and enthusiasm, she soon encounters one frustration after another.  A squabble with her old nemesis from her previous school is the final straw for Lemonade. Her emotions get the better of her and she ends up shamefacedly sitting (uncharacteristically) quietly in the classroom quiet corner.

In the second story, titled “The zoo that comes to you”, Lemonade excitedly anticipates her zoo themed birthday party.  But her dreams of lions and giraffe roaming around her back-yard turns to disappointment when three little cages are delivered to her home – each containing a turtle, a parrot and a mouse.  Nonetheless, Lemonade attempts a creative solution which ends in chaos and energetic, noisy games in the backyard. Finally, much to the delight of all the party guests, Lemonade’s fire fighter Dad saves the day with a visit in his fire truck.

Davina Bell creates Lemonade’s character with warmth and compassion. Lemonade is lovable in her sheer joy for life and whilst her wilfulness and defiance get her into difficulties, she has the thoughtfulness to learn from her mistakes. Ordinary family and school events are told with humour and a touch of drama.

The book is in bridging novel format with Karen Blair’s vibrant, energetic, colourful images interspersed through the text.  The illustrations convey a sense of Lemonade’s energy and portray the characters’ emotions through animated facial expressions.

With Lemonade being in year one, the stories will be relevant to children in a similar age group.  Lemonade’s outrageous defiance and daring antics will have the kids gobsmacked and concerned that she shouldn’t get herself into too much trouble. I enjoyed the book’s humour and found the storyline both engaging and amusing.