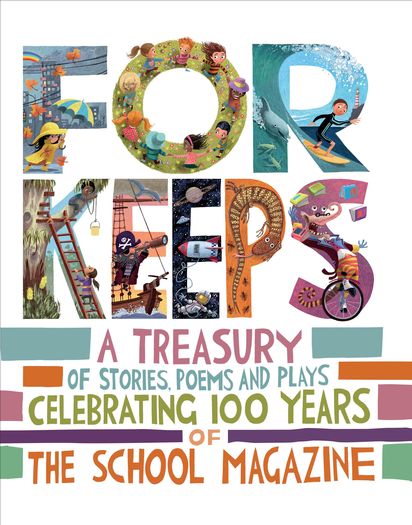 This book is a must-have for every Aussie family. For Keeps: A Treasury of Stories, Poems an Plays Celebrating 100 Years of The School Magazine is one that should be passed on from generation to generation.  This anthology contains a selection of stories, poems and plays published in the Magazine since the first issue. Here you’ll discover some of the finest writings by Australia’s talented authors, all from the pages of the longest running children’s magazine in the world.

The School Magazine has been published continuously since 1916 and has inspired many children over the years. The contrast between the literature of today and that of 100 years ago, as gathered in this collection, is amazing. The topics discussed, the dialogue and the plot varies according to the generation. It’s rare to find it all collected together like this.

Dad’s Day, a story from the 2013 issue, tugs the heartstrings and makes you teary. Alex is nervous about Dad’s Day at school because his father has passed away.  His mum comes up with an amazing plan to honour his father and share what he was like with others. There were tears when I was reading this to my daughter.

Then there is a story that is just bizarre and hilarious, from 2001, called Rebel Baby. My daughter couldn’t stop giggling at the grumpy baby who talks to Jack, telling him about all the things he hates but is forced to do because everyone expects it of him.

The poem from 1930 called The Little Man Cricketer is a classic for those who love cricket. And the short poem from 1951 called Wanted…A Dragon is a fun one about a boy who is looking to get a dragon.

The endpapers depict the various magazine covers over the years – a great display of the changes the Magazine has gone through.  There is also a decade by decade round up on how world issues impacted the stories published in the magazine. It is interesting to note that it wasn’t until the 1930s when more content came from Australian writers and stories became less and less about the royal family.

This is a precious book that should be passed on to your children, and your children’s children. Hopefully, the Magazine will keep publishing such amazing writing for another 100 years.