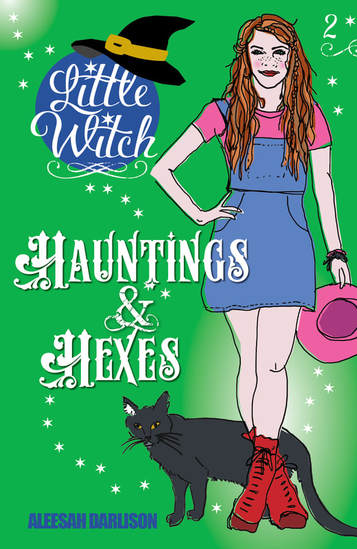 “She’s bent on resurrecting herself from the dead and can shape-shift into a giant serpent. I’m still playing around with cats. And the occasional frog.”

Courtney Little is a witch-in-training, she’s dealing with moving to a new town and starting at a new school and things aren’t going too smoothly for her. Her spells don’t quite work the way they’re supposed to, and they’re getting her noticed when she’s supposed to be staying under the radar. And then her problems get dialled up a notch when she accidentally helps a malevolent spirit get its hands on a powerful grimoire. Fortunately, she has friends Justice and Burgundy, and her cat Ink, to help her out.

Aleesah Darlinson’s Little Witch series is going to be a hit particularly with girls aged 9 to 12 who like a little magical fun. Courtney has a heaping helping of fears and hang-ups, making her life challenging while she’s trying to learn how to control her magic. This second book in the series is driven by the mistakes that Courtney makes trying to work out when she shouldn’t use her magic and when she should.

Courtney does a good job of self-reflection, examining what has gone wrong with her actions and working towards making things right, and there is a healthy dose of “Believe in Yourself” at the heart of the story.

There is a definite hint of potential age-appropriate romance brewing, and I would be interested to find out in future books how Courtney handles Lulu, the girl whose offer of friendship may not be as friendly as it seems. Courtney is in for some interesting times.

Darlinson skates a little close to clichéd devices in a few places, such as the heroine escalating the problem by not telling someone about it when she clearly needs to, but Courtney steps up and faces her challenges even when she’s out of her depth.  I think young readers are going to find her a very likeable heroine.