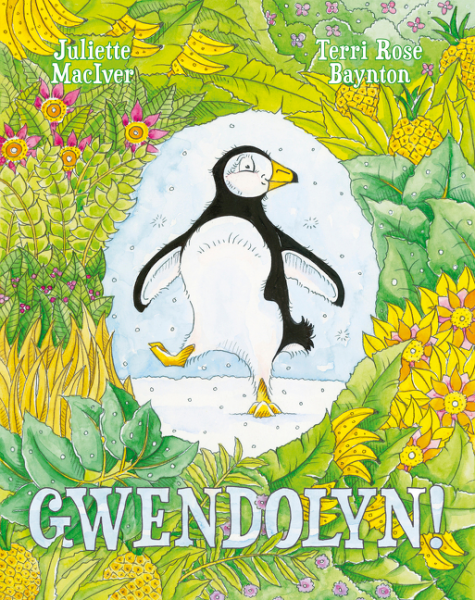 Gwendolyn is a sweet, cheerful penguin who just happens to live in the lush, steamy jungle – about as far from her cold, natural environment as she could be. But Gwendolyn embraces it. She loves her life and her friends – a jaguar, a monkey and a parrot. She joins in the activities they like doing and helps them to always see the bright side of every situation. Until, one day, she wonders what it would be like to be a penguin in Antarctica. Is that where she really belongs?

The story is easy to read aloud and has just the right amount of repetition and prompting to encourage youngsters to join in saying “Gwendolyn”.

The illustrations are bright and colourful, yet soft at the same time, which I like for the targeted 2-5 year old audience. There’s animals to identify and count and the colourful feather endpapers are a delight.

Gwendolyn is a lovely story to read and enjoy, or could be used as a prompt for a discussion about belonging, and is the first collaboration by New Zealanders Juliette MacIver and Terri Rose Baynton.  A Teaching Guide ise available on the HarperCollins website.