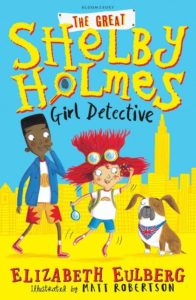 Shelby Holmes is an unusual child, to say the least.  She is a loner and certainly an unconventional nine-year-old.  But Shelby possesses a unique talent – an impeccable ability to solve crimes for which she has gained quite a reputation around her New York neighbourhood.

John Watson is a bit older than Shelby.  He wants to be a writer and has just moved into the same apartment building with his mum, and without his dad.  It’s a very different life for a boy who has moved around all his life as an army kid.  This new location is strange and confronting for John in many ways; mostly because it will be a permanent home, something that is completely unfamiliar to him.

When Shelby almost blows up their apartment block at 221B Baker Street – by accident – she and John become acquainted.  Shelby shows John around the city blocks of his new neighbourhood – or at least allows him to follow her – introducing him to some of the more unusual characters that make up downtown New York.  For John, it is a distraction from unpacking, yet again, and a way to forget that his dad hasn’t been in touch.  As time progresses, John become Shelby’s would-be assistant, or at least steadfast companion, as Shelby endeavours to solve the mystery of a missing prize-pooch.

In the footsteps of their namesakes, Holmes and Watson take us on a delightfully funny and quirky adventure.  Although the book is titled for Shelby Holmes, it is John Watson who narrates the story; his journal entries describing the ups-and-downs of adapting to life in a big city as he discovers the secrets that enable Shelby to eventually solve the crime.

Eulberg has created a book that is a joy to read.  It is well-paced and cleverly written; and the fabulous illustrations add to the text without spoiling any of the details of the mystery.  I am really looking forward to reading The Great Shelby Holmes Girl Detective to my grandsons however, I must admit (rather shamefully) that my initial reaction was that it was a book for girls being titled Girl Detective – but I was very wrong.  In fact, the gender-neutral name of our young female detective and the narrative in the voice of a young boy, makes it very much a book for both genders who I am sure will engage with all the characters.  What a great book for all ages, including oldies like me.