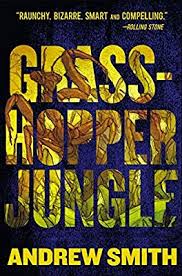 Grasshopper Jungle is set in fictional Ealing, Iowa, in decline since the local McKeon factory closed down, this novel relies on the assumption of malaise in contemporary social and economic circumstances, as well as aspects of old fashioned science fiction.

The three main characters, Austin Szerba, the narrator, preoccupied by his own sexuality, Robby Brees, and Shannon Collins attend school and spend their time like all the other teenagers in town, until they find themselves closely involved with the end of the world.  Spawned by irresponsible, profit driven scientific work undertaken by the McKeon enterprise decades ago, an army of two metre high mantis- like creatures emerges. The monsters begin to decapitate and devour the human population relentlessly while Austin and his friends retreat to a well prepared 1970’s era secret bunker beneath the old McKeon mansion.  Austin and Robby emerge at safe times and enjoy road trips in expensive cars they find abandoned.

The story depicts forlorn places and relationships. The science is hard to accept and the senseless bloodshed is horrible. The vernacular descriptions of Austin’s mental reactions and body functions defy more conventional expectations of literary content and merit. As a dystopian tale this narrative makes a dramatic but mixed impression.