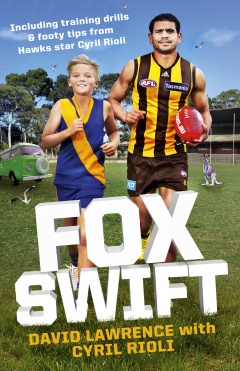 When the Swift family relocate to the country town of Davinal, talented eleven year old footballer, Fox Swift, has to choose whether to join the successful Dragons club or the struggling Diggers team.  The Dragons are captained by Mace Winter, son of the most powerful and ruthless man in the town and feared for his sarcasm and bullying throughout the Davinal primary school.  Fox joins the Diggers even though they have dilapidated clubrooms, a neglected ground and a coach who is clueless about the game.  He uses his leadership skills to revive the Diggers as an effective club, gathering around him a loyal team with assorted levels of ability and a former champion player urged out of his reclusive life to be their coach.  With encouragement from Hawthorn star Cyril Rioli, the Diggers improve beyond expectations and ultimately challenge the dominant Dragons for the premiership.

Fox Swift emphasizes all the positive aspects of Australian Rules football and sportsmanship in general.  The eclectic group of players support and encourage each other, learning to lose with dignity and win with pride.  They work together to rebuild their club, developing loyalty and team spirit, while using their diverse physical abilities and wits to defeat their opponents fairly.  Within the story young readers who love football are given plenty of details about training drills, tactics, the benefits of a good diet and tips on how to hone their skills.  The use of contemporary figures, such as Cyril Rioli, Lance Franklin and coaching legend John Kennedy, add authenticity and authority to the text.  This is reinforced by an appendix using photos of Rioli demonstrating various football techniques.  A dictionary of football terms makes the story accessible to all.  With humour throughout and comic illustrations, readers in upper primary to lower secondary, especially football fanatics, are sure to enjoy this sport centred text.  JN