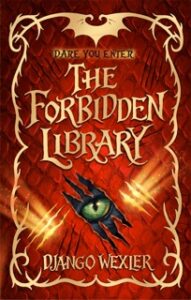 To a degree, the heart of Wexler’s fantasy is where the reader is invited to see the richness of life and the real dilemmas of what it is to become a Reader, a person who literally enters in to the Forbidden Library where ancient texts hold a form of magic that reaches out across time and space, such that, for those truly open to the telling, they can become Readers who are possessed and potentially powerful players in this world and all possible worlds.

Young Alice lives in the early nineteenth century world of the depression era where life’s past certainties of substance and security are disppearing.  She is a very respectful young girl (fit for living in a patriarchal world) who is overwhelmed when, late at night, she overhears a fairy arguing with her father, when later her father tells her that he must travel overseas by steamer, and when the ship her father is on has sunk in a freak storm ‘with all hands’.  Suddenly all structure is gone in her life as she is surrounded by parasitic lawyers and sent off to an uncle she didn’t know existed, one Geryon.  His manor-type house is remote and, along with the library, a place full of strange characters doing seemingly odd things to do with books.  Slowly her true nature emerges.  Behind the respectful exterior, she is an inquisitive, persistent person who is prepared to cross the boundaries set by others to search for the truth of what has happened to her father and to find out what is the nature of our existence.  Is reading simply a school thing or is there magic in our world today?

Of course, as a hero type story, there are plenty of villains.  From questionable relatives to aggressive servants, from fairies (of the bogey nature) to dragons, Alice has to show in-depth and lateral thinking as much as courage to win, episode by episode.  However, there is one villain (which then becomes her familiar), a ‘swarm’ bird pictorially represented as a kiwi.  Forgetting the notion that swarms of kiwis down-under (national icon and all that) are potentially a threat to an American hero, there is the issue of eco-criticism; namely, how children are positioned to read the world in the word.  The notion of the kiwi being aggressive towards larger animals like humans is not ecologically accurate: they are more inquisitive and at risk because they have not experienced large aggressors.  Being flightless, they are vulnerable to cats, dogs and stoats.  Indeed, as a consequence, they are an endangered/critically endangered species.  They are aggressive towards their own species (territory and all that) but don’t attack humans deliberately.  Does it matter?  Certainly, younger readers need to be given the critical skills to assess, and if necessary, unlearn information that is embedded in fiction.  What do you think?