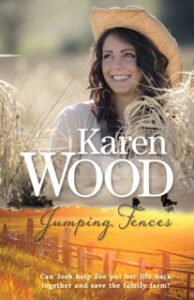 Zoe has amnesia after a fall from her horse while mustering cattle for her over-worked father.  As she recovers, she starts to have flashbacks about the scene: the correct number of cattle going in the yard, a boy rescuing her, a kiss meant for someone else.  There are other puzzles, though, such as why her boyfriend and her best friend aren’t answering her texts, and her father’s reluctance to talk about Zoe’s horse.  The only ones that seem to be standing by Zoe are her brother, Mike, and his geeky but handsome friend Josh.  When Zoe discovers it was Josh that helped her at the accident, she is at first mortified then comforted by his presence.  Josh helps her investigate the many mysteries surrounding her accident and the disappearance of her father’s cattle.

This is an unabashed teenage romance, a YA example of ‘farm lit’ or ‘rural lit’, with dashing heroes on horseback and good-looking girls sorting out family problems.  Zoe has a set of issues that many could identity with: divorced parents, a father who doesn’t understand her behaviour, the betrayal of best friends.  Perfect Josh and his belief in Zoe is the hook that pulls the story along.  The ending is a satisfying resolution of the many issues that are entwined throughout the book.