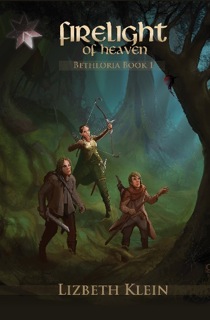 This might be Lizbeth Klein’s first foray into a fantasy novel series, but she is an experienced writer who understands the form.  The manuscripts of the first and second novels have already won prizes, and Lizbeth Klein is a long time educational writer for the early primary years.  Wombat are on a winner.

This novel introduces Dougray and Robbie, two teenagers thrown into a dark endgame, where a tyrant king, his dark magic, and a series of precious magic crystals might mean the end of civilization.  The two boys and an elf-girl must enter at least six different lands on the quest that has been forced upon them, and this novel takes us to the first of these dangerous lands.  There are prophecies and riddles, a forest of spiders and monstrous black wolves.  There are beautiful swords, and a queen spider whose web is more powerful than the strongest hunter.  For relief there is a toggle named Tisser.  If you love an exciting story with plenty of action and mystery then this is the book (and series) for you.  Recommended for readers 9 to 13 years.