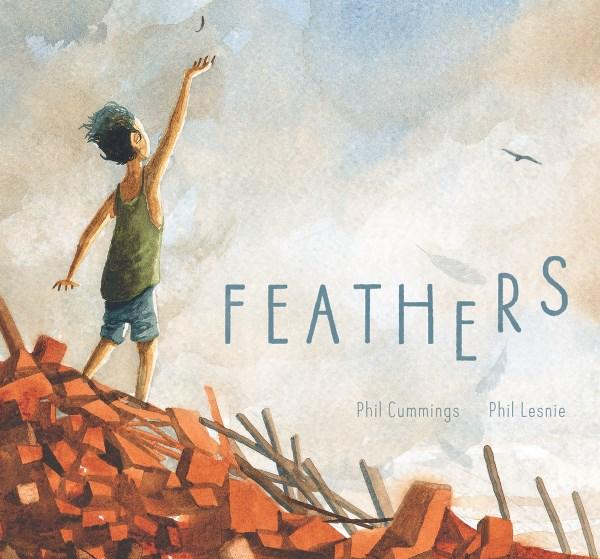 The sandpiper takes flight as the weather cools, embarking on its long migration across lands, and their many and varied inhabitants, and oceans. As it migrates, people below catch feathers as they drop. As it nears its destination, a girl living nearby catches the final feather. This is not just a story of a bird migrating but also those living in the countries over which it travels. There is a boy whose home has been destroyed by a natural disaster, and guns firing in the night, with people fleeing on the following page. The narrative shows the subliminal link of the world’s inhabitants, both animal and human.

This is a well thought out book, in both the written and visual language. The written text is well worked and flows beautifully. It is deliberately placed on the page to full effect. The illustrative text is mesmerising. Colour, direction and frames are the most prominent picture book codes used to help tell the story of the sandpiper. The small vignettes soften while enhancing the mood. The direction of the bird across the page leads the reader further into the book. Phil Lesnie used watercolour, pencil and gouache for the images, and they are beautiful.

This book could be used for many purposes in the classroom, from picture book design to bird migration, to a discussion on the displacement of people. Teacher notes are available through Scholastic.

It will do well in primary school and public libraries.