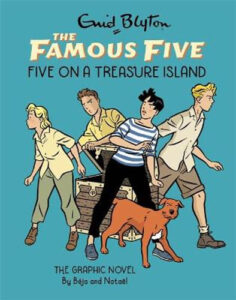 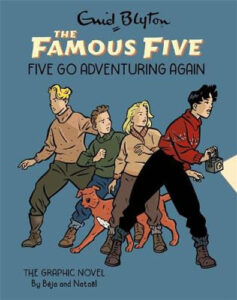 I was quite excited when these two books arrived as I avidly read all the narrative versions as a child and have good memories of the stories, despite the negative press that Blyton has received over the last few decades.

These, the first of the series as published by Blyton in the 1940s, are now graphic novels. They manage to capture some of the hooks which the original stories contained. However, the graphic novel format means there’s some abridging. Nataël (father) develops the text and he has managed to capture the language of the original stories in his text, both in the speech balloons and captions. I found the font a little small, especially in the sections which are printed in italics. Béja’s (Nataël’s son) illustrations make the children too old, aiming, I assume, at reluctant teenage readers, but reflect the nostalgic colouring of the period. The children should be aged 10-12 but look much older.

All the stories are set during the children’s school holidays. Five on a Treasure Island sets the scenes as the children get to know each other on the island of Kirrin and the relationships within the group develop within George’s environment. There is a gradual acceptance, from them all, how to get along. Timmy the dog is a character within the story, and we read of his thoughts and responses, in the same way that Blyton showed. There are many stereotypical elements – George’s gruff irritable father and accommodating mother, gender roles, the character of the “baddies”, but this reflects Blyton’s originals.

Another four titles, already available in France, are likely to be published in English. So, a greater audience will be introduced to the Famous Five adventures, with the graphic novel format widening the readership. Suited to all those who enjoy Asterix, Tintin and other graphic novel adventures.