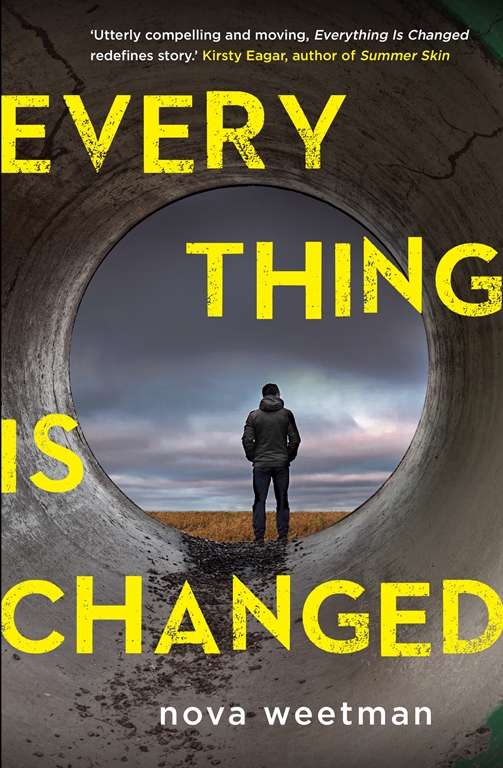 Jake and Alex have been best mates forever. Then one terrible mistake and changes everything.

Set in Melbourne and told backwards, Everything is Changed, pulls the reader through the debris of a once strong friendship that was already teetering, but finally collapses after an attempt to stay connected goes horribly wrong.

At first blush this book may seem to tell a story about the repercussions of a stupid mistake, but it’s actually a lot deeper than that. This book is about friendship and the desire to hold on to it even as you realise it’s slowly slipping away.

It may take a little while to get into the rhythm of the backward storytelling, but it is well worth it and by the end I appreciated that Weetman had not chosen this writing device to be clever (although it is), but rather to highlight how gradually a friendship can crack before breaking, and to establish a longing to go back to how things were before. It’s interesting, effective and immaculately executed, to the point where as you read on, the boys sound more similar. Where at the start I could pick up the book half way through a chapter and know instantly which boy was narrating, as the book progressed this became trickier, and I can only assume this is done on purpose to further highlight how the boys grow apart.

All the relationships felt authentic, from the two very different mother and son relationships, to the boyfriend/girlfriend relationship between Alex and Ellie, but foremost, Weetman has done an amazing job portraying the relationship between the two teen-boy protagonists. The scene where Jake and Alex are mucking around in the park, where the departure of Alex looms large and Alex, feeling guilty and wanting to make it better for Jake, tugs at him desperately and says ‘Let’s get into trouble.’ That scene has stuck in my head. It brought back to me instantly what it was like to be a teen and to try and fight against change by doing something momentous or, more likely, stupid.

This book is so rich that, were I teaching, I would jump at the chance to use it in the classroom. Filled with literary devices to unpack – written backwards, alternative POVs, first person and third person perspectives – it is also stuffed with moral dilemmas. I can see the heated classroom debates surrounding such questions as: should they have gone to the police immediately? Was there any point in coming forward when they did? Should they be tried as adults? What penalty should they receive? Was their friendship already doomed? I could go on. But don’t think that because it would make a great book to study, teens won’t like it. Because they will.

Weetman also handles the issues of class division adroitly. It’s there, simmering in the background, tinting situations, pressing on the characters and shaping them, but not overt or cliche.

In an effort to try and produce a thorough review, I have been scrounging for any negatives and honestly, I can’t find any worth pointing out. I can only assume that this is testimony to the fact that Weetman completed over twelve drafts of this novel before she was satisfied with it.

This is a well thought out, superbly executed book, filled with emotion and nuance and without a dystopian society or overly articulate teen in sight! It’s a book about friendship and the way it can change significantly through adolescence. Teens will relate to that deep sense of loss for a friendship that steadily slips away despite best efforts to keep it together – the sadness, angst and anger, the pull of the past rather than the reality of the present. But what stands out most, what I love above all else, is that this book is authentic. Nothing, not the writing, the characters, the situation, not even the fact it is written backwards seems forced and that’s why I think teens will eat it up.

The more I think about this book the more I find myself marveling at its depth and authenticity. In fact, I find myself so invested in the characters and their story that I am desperate to know what happens to the boys once they are arrested.
Sequel Nova?
Please?

Teachers’ Notes can be found on the UQP website.