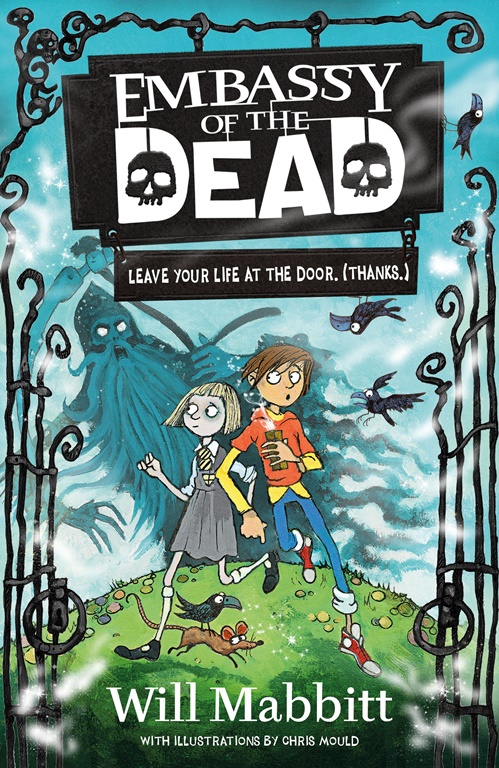 ‘Leave your life at the door. (Thanks.)’  You will savour phrases just like this all through the reading of Embassy of the Dead. They will tickle your funny bone so much, you will want to share each gem with the person beside you. A hilarious, supernatural adventure and, if you open your heart, you will find that the author, Will Mabbitt, cleverly delves into the psyche of a child.

Jake Green is no ordinary kid; he can interact with the spirit world. When mistakenly given a strange box containing a severed finger, Jake opens it. This breaks one of the Embassy of the Dead’s most serious laws, and alerts the Embassy who send Mawkins, one of the Embassy’s twelve reapers, to drag Jake to the Eternal Void. Now Jake’s running for his life with the help of the ghosts of Stiffkey, the undertaker, who mistakenly gave him the box in the first place, and hockey stick wielding school girl, Cora. But can he trust them?

Will Mabbit has created a story that grabs you from the start, encompassing supernatural themes with contemporary issues rife in our society today. Jake, feeling a ‘creeping realisation of insignificance’ (p. 129) struggles with his limited sense of self-worth both at school and at home. Combine this with a mounting personal guilt as he comes to accept his parent’s separation. As Jake runs for his life foremost in his mind are these problems he faces every day. This makes for some juxtapositions that made me waver between laughing and concern.

Chris Mould’s illustrations are suitably dark and grim yet possessing decorative gothic touches. There are some minor mistakes in the text such as the incorrect use of a name and repetitive actions which were a little confusing but these will not ruin the enjoyment of readers.

A great read for 9 yrs+ and the next obvious choice for fans of Skulduggery Pleasant.