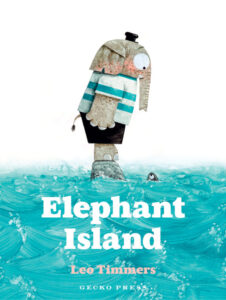 Elephant Island is the English edition of a picture book originally written in Dutch by highly renowned Belgian picture book author illustrator, Leo Timmers. It is about an indomitably optimistic and resourceful seafaring elephant who makes the most of difficult circumstances when his boat sinks at sea. Whilst marooned on a rock, he uses whatever materials come his way (usually in the form of boats that crash into the rock) to expand it and welcome an assortment of new inhabitants.

I love the irony in the telling of the story with the text referring to Elephant’s overly optimistic view of his circumstances, whilst the illustrations reveal the true situation. The tiny island (according to the text) on which Elephant finds refuge is illustrated as a rock with hardly any standing room; the boat that “rescues” him is actually too tiny to withstand his weight, and so on. There is also amusing word play with double meanings, altered idioms and references to famous poetry or songs. The general quirkiness and absurdity of the story is playful.

The illustrations are fun too with brightly coloured boats and big-eyed cartoon style animal characters, who have anthropomorphised bodies and clothing. There’s an interesting progression in the illustrations, from the bareness of the grey expanse of sea, at the beginning, to the increasingly cluttered assemblage of structures built randomly on the rock in Meccano set style. And within those later, jumbled illustrations there is humorous detail too.

This picture book story about making the most of a difficult situation is lots of fun for 4-6 year olds and the adults who read to them. With the illustrations integral to the storytelling, it makes for a good visual literacy teaching resource.