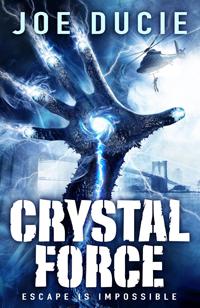 Will Drake, Irene Finlay and Michael Tristan have escaped from the rig where the Alliance were keeping them prisoner. The crystal substance Will and Drake have been exposed to has created powerful forces within them – the ability to heal for Irene, but a much more dangerous effect for Will. Gradually, the crystal force is consuming him, making the destructive power within him grow. Will battles the Alliance in an attempt to return to London where his mother is in need of Irene’s healing but Skeleton Man – a former rig guard – is a violent enemy who has almost been consumed by crystal. Tristan’s ‘betrayal’ and the infiltration of New York by the source of the crystal brings the story to its current climax: Will, Skeleton Man and innocent child Amy go through the one-way portal, leaving Irene wondering whether she will ever see Will again.

Crystal Force leaps from action scene to action scene. Packed with fight scenes that become increasingly electric as Will’s body mutates with the effect of the crystal, it is plot-driven ride. At times it seems that it has been written at breakneck speed as well, with a series of events that should build suspense but are more puzzling than surprising. The crystal monsters that come out of Will’s powers as he fights seem illogical when the source of the crystal is chemical and originating from under the sea. Nonetheless, Will’s character is believable and his mix of horror and excitement at what is happening to him will make readers want to pick up the next one to see what happens as his body slowly crystalises.