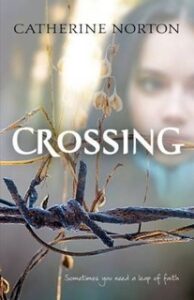 Set in an unspecified time and place, Crossing reveals a world of perpetual food shortages, decaying living conditions and a repressive government with spies everywhere, including within families.  Living behind a high wall with watchtowers that separate them from the rest of the world, the population are constantly urged to live by the principles of ‘equality’ and ‘comradeship’ and to report any ‘suspicious acts’.  Twelve year old Cara’s parents are government officials and when they are away on secret business she has the chance to escape over the wall to the unknown world beyond.  Reared on propaganda and government dogma, Cara must make a life-changing choice – escape with her friend Leon or stay with her family and the life she knows.

The story is told in the first person creating a sense of immediacy, while Cara’s introspection and reflective nature make her a sensitive and appealing character.  A non-linear structure gradually unfolds the intricacies of the plot and slowly reveals the complexity of the characters, holding the reader’s attention until the final page.

There are unavoidable echoes of Orwell’s 1984 in this tale of an authoritarian regime and the individuals who question and challenge its power.  However, its similarity to East Germany during the time of the Berlin Wall and closed societies such as North Korea, ground this novel in the real world and make it suitable for readers in lower secondary levels.

Crossing explores many themes including loyalty, family, trust and freedom.  It is a thought-provoking novel with a simmering tension that builds to dramatic climax, but its real substance is found in the potent warning of Ava, Leon’s rebellious sister, when she tells Cara, ‘Don’t ever let them wall up your mind’.