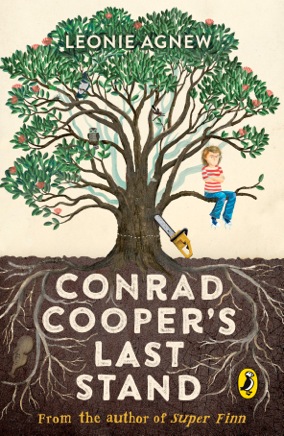 Young (10 year old) Conrad is a quirky lad who struggles with his sense of identity.  Given that he never knew his biological father and is very uncertain of his relationship with his stepfather Gaz (who is a police officer focussed on the idea of boundaries and accountability), and given that he is worried about his compliant mother and all the hidden arguments and disturbances of family life, Conrad struggles with the tension between subjectivity (performing his duties and being compliant) versus agency (what makes and who is capable of making decisions).  This quest for identity leads him to question his culture (and being a kiwi) as much as his personal life.  And so he explores the pakeha/Māori divide (given that this story is set in the 1970s Muldoon era) and he decides that perhaps if he prays to Tane Mahuta, the Māori god of the forest and takes up environmentally friendly intentions and activities he might win enough star chart points to persuade Tane to be his mentor and spiritual guide.  The political and cultural context of the Bastion Point occupation by Māori protestors, the debate about the historic confiscation of land by government forces and the consequential grievances, and the eventual clash between police (eviction) and protestors is very much part of this story.  Conrad wants to become Māori in his search for identity and, with his equally quirky mates Jasper and Suzie, he sets off to Bastion Point to support the Māori position.  What is intriguing about this story is that the adults as much as the children are struggling with a sense of identity.

The author certainly shows great ingenuity in telling the story from a naïf perspective which consequently is a source of humour and comedy for the older reader.  However, the last stand that Conrad undertakes and its deep resonance with the myth of Rangi and Papatuanuku is poignant and provoking.  What the author cleverly alludes to is the parallel between story and actuality.  For adolescents to grow and have the space to exercise agency in their journey of identity, they need to break free of the subjectivity of being parented by the controlling Other.  This is Tane’s business in the story of Rangi and Papatuanuku, and is also Conrad Cooper’s last stand.  This is a sophisticated story that will resonate deeply, as archetypes do, in all readers.  Teaching notes and further background information can be found on the webpage.  Highly recommended.