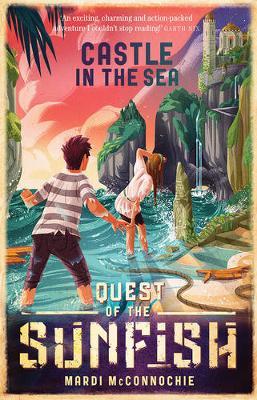 In a future where our planet has suffered catastrophic flooding from an experiment gone wrong and where the Admiralty maintains strict control, twins Will and Annalie sail into danger across the seas to find their missing father.

In book 1 Escape to the Moon Islands, the twins’ father, Spinner, has suddenly disappeared. There was no explanation and no goodbye so the kids are thrown into a spin, and decide to find him using his boat the Sunfish. Using her analytic skills developed from the games she used to play with her father, Annalie decodes a list of names and directions, and off they go across the sea, encountering and avoiding danger with the help of Annalie’s school friend Essie, stranded slave from a pirate ship, Pod and the intelligent talking bird, Graham.

Are you as sceptical of kids’ abilities to sail across the seas as I? Well, it is as if their father had been training them in survival skills, each of them to their own strengths. Will is more of an engineer that jumps into action while Annalie is more analytical and thinks before reacting… both skills can save their lives in this action packed series!

In this second book, Castle in the Sea,  I instantly fell into the pace of the story. There is hope followed by deception, friends made and trust lost. We see Will and Essie swept overboard in a storm and Essie surprises herself with her survival skills. We meet talking dolphins and Pod tries to overcome his fear of swimming when he spears the Sunfish on metal debris.

Castle in the Sea is reminiscent of Swallows and Amazons by Arthur Ransome. The descriptions created wonderful scenes in my mind, the characters were well developed, and the physical layout of the book was comfortable to the eye. The freedom these children have to make their own decisions and the strengths they develop are wonderful messages to all readers. I recommend this book for both boys and girls 8yrs+.