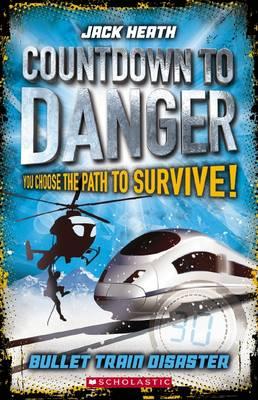 So, how would you choose to die? Choked to death by thick black smoke and ash from an erupting volcano? Smothered by an avalanche? Bitten to death by deadly ticks?  Eaten alive by a bear? And would you prefer to be alone on a mountain, hijacked in a crowded train carriage or in the company of royalty? These and many more choices are yours to make, and if you don’t like how things turn out the first time, try and try again. You could, of course, be lucky enough to find one of 11 possible plot lines that lead to survival, but identifying those may prove more difficult than you think!

Australian author Jack Heath has serious experience when it comes to getting the excitement-fuelled and danger-filled blood of teenagers flowing. It shows in his confident handling of potentially gruesome, threatening and scary subject matter in a way that lets the reader engage and imagine, without overwhelming and undeniable detail. This ‘choose your own adventure’ style book puts the reader firmly in the driver’s seat and forces you to make life and death decisions simply by turning the page. The premise of the story itself is fairly simple to begin with – the first passenger-filled journey of a bullet train up the side of a massive mountain. But when a single passenger falls from their seat and is vaulted down the carriage and out of the rear door, is it an accident or the result of some sort of conspiracy?

The twists and turns embedded in this book are varied, unexpected and interesting without being too fanciful. The brevity of each plot line sometimes renders it a little difficult to fully buy in, however once you become accustomed to the nature of the text, each re-read becomes easier to accept.

The ‘countdown’ element works on the basis of average reading times and is supposed to see each plot line followed to completion in 30 minutes. I admit to not being your average teen, however when the top of the page marks 8 minutes to go and 2/3 of a page later you’re dead, that feels very sudden and somewhat of a let-down. And it is you. You are dead. You choose. You feel scared. You think. It’s all you. Not an avatar, not a character you relate to but you. There is even scope early in the book to define gender so whoever you are, this book is about you.

This is the first book in a new series (Countdown to Danger) from Heath and I have little doubt that it will find a significant following in young teens who like their adventures fast and unpredictable. This format seems to fit with the quick response, extreme stunt effects and ‘player’ controlled scenarios that are often embraced by this generation of digital natives and it is expertly handled.