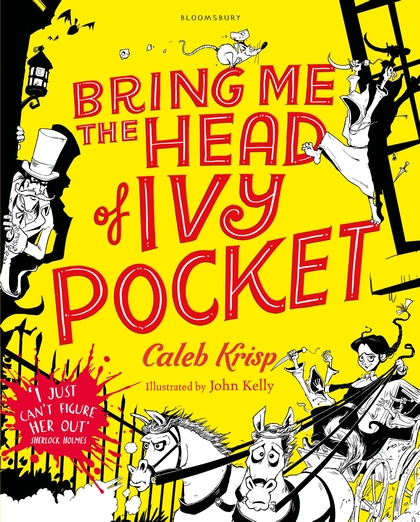 Ivy Pocket, who is bonkers, (the author’s words, not mine, although it is a spot on description) is back in the wonderful series finale of her adventures in Bring me the Head of Ivy Pocket.

It’s a little hard to describe the Ivy Pocket series: gothic, wacky, peculiar, hilarious are all adjectives that come to mind. It is even harder to describe the plot in this novel because the plots in the series are so complicated: people keep appearing and disappearing, especially if they are ghosts. There are also frequent fight scenes which are very exciting but a little unclear as to who is on which side. This is of small importance, however, as it is also quite possible to thoroughly enjoy an Ivy Pocket book, without having a clue as to what is going on.

Still, shall I try? In this book Ivy is on the run, ‘homeless, penniless and hunted’, not to mention socially incompetent, delusional and very good at kicking people. This time, she must rescue a humming woman from the mental asylum and a friend from certain death in another world, outsmart the diabolical Miss Always and some nasty heiresses and run away a lot. In previous adventures, she had to deliver a magical necklace from a dying duchess and was the newly adopted daughter of two coffin makers, so naturally she copes with her trials with her usual energy and complete lack of common sense.

Bring me the Head of Ivy Pocket is suitable for anybody aged 10 and over, particularly if they are a little eccentric. I loved it.