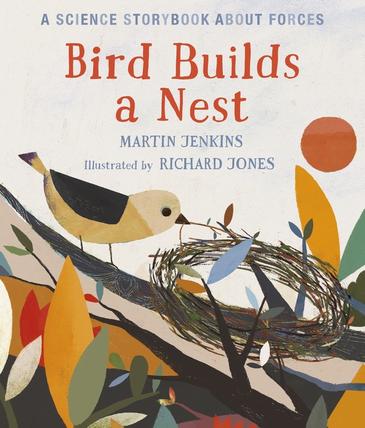 Bird Builds a Nest is a ‘science storybook about forces’. It is a picture book for young children telling a story about a bird building a nest but in the process, it imparts information about pushing and pulling.

The deceptively simple story which can be read to very young listeners follows Bird as she finds a worm for breakfast and then embarks on the tasks involved in building a nest. In the course of doing this, she does quite a bit of pulling, lifting, pushing and occasionally dropping things. Sentences in smaller font size explain that these actions involve forces. At the end of the book is a suggested experiment involving balls of different weights, and a simple index.

Martin Jenkins has written many non-fiction books for young readers.  His text unobtrusively introduces physics to a straightforward tale about a bird building a nest in which to lay eggs which then hatch. Richard Jones has used a muted colour palette in earth tones which suits the subject matter and his animals and plants are depicted in a stylised manner. Walker Books has the successful scientific picture book down to a fine art and the production quality is very high.

This is a useful book for pre-schoolers which can be read on several levels. Recommended.