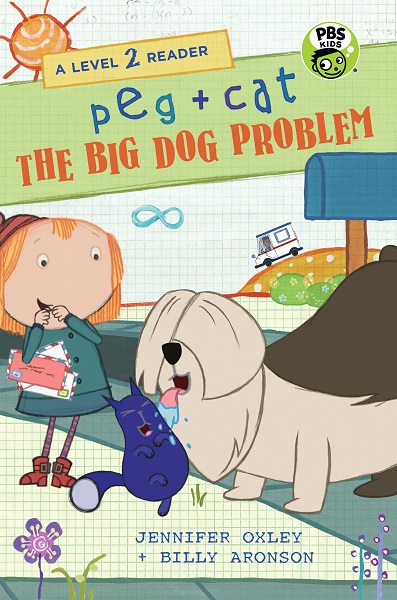 Peg + Cat is an animated American children’s show produced by PBS and available to watch in Australia on ABC Kids TV. It features Peg, a clever little girl, who encounters a range of problems and solves them using creative solutions, with help from her cat, Cat. The show has a mathematical focus, which is evident in the opening number, so much of the problem solving requires the use of addition, subtraction and basic arithmetic. Several songs are featured in each episode as the characters apply their problem solving skills. The animation style is simple but very colourful. As the book introduction notes, Peg and Cat “sing, dance, and visit lots of cool faraway places”.

There are numerous books based on episodes of the show, including The Big Dog Problem. In this story Peg’s mother has given her five letters to post, but several problems arise whilst she is trying to complete the task. In the first chapter Peg talks to Cat about how they can divide the letters between them, so they can share them fairly. They try different combinations, but since there are five letters they need to come up with another solution.

Once they have worked out a fair way to carry the letters, they encounter a new problem: the letterbox is blocked by a big dog. Afraid of the dog, they come up with several plans that will let them post the letters, but none of them work. Eventually, through an accidental discovery and through what they know about height, they manage to post the letters. Peg and Cat have a ‘problem solved’ song that they sing whenever they find solutions to their difficulties, and the book concludes with this.

The book is a level 2 reader, with simple, active language. The use of repetition of ideas and phrases will help beginner readers. Each picture is set out on grid paper, emphasising the mathematical focus and each story focuses on a simple mathematical concept, whilst also addressing issues younger children face, such as the fear of a big dog. Peg and Cat are engaging characters who are optimistic and resourceful.