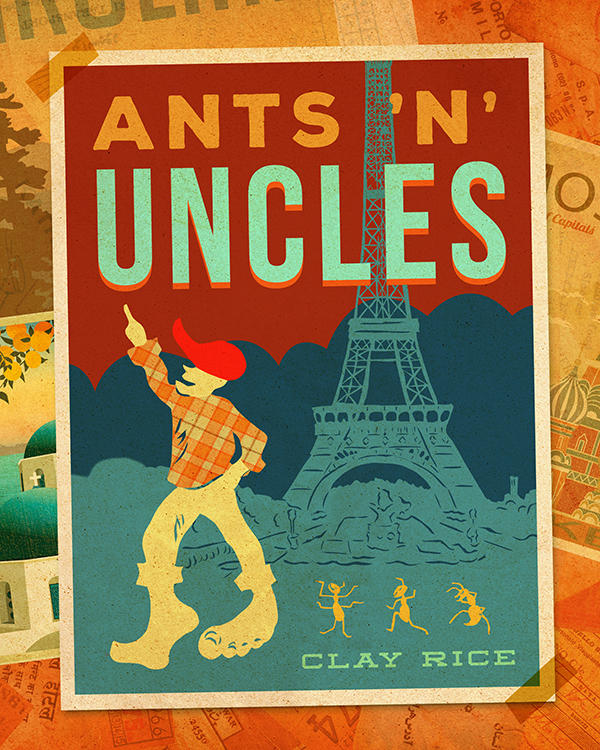 A little girl had an uncle who couldn’t dance, no matter how hard he tried. Until one day, he steps on an anthill, gets ants in his pants and finds himself setting off on a dancing world tour! He cancans through Costa Rica and pirouettes through Paris, becoming so famous that his niece has to read the newspaper to find out where he’s been.

Clay Rice is both the writer and the illustrator of Ants ‘n’ Uncles, and it is his delicate and playful papercuts that adorn the pages of this book. Uncle himself is cartoony and bold, moving dynamically and at times, hilariously, across the world. The different landmarks – Eiffel Tower, Leaning Tower of Pisa, Great Pyramids – are  instantly recognisable and beautifully formed.

The text is simple, rhyming and rhythmic – you can almost hear the beat thrumming under the poetry. Readers in Australia may need the wordplay of the title explained to them. We pronounce ant and aunt quite differently, but not so in the United States. The other wordplay however, works well, such as ‘un-ant-ticipated.’ The vocabulary of the way Uncle moves through each country is specific and interesting, words such as ‘two-stepped,’ ‘loco-motioned,’ and ‘moonwalked’ allow for much exploration. Perhaps each dance could be looked up on YouTube and then tried out in the library or classroom! Each country could also be found on a map and predictions of where else Uncle might be found could be made.