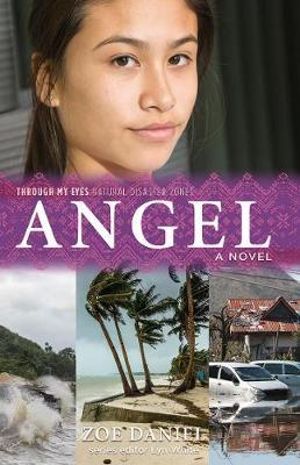 Zoe Daniel is currently the ABC’s Washington DC Bureau Chief, but before this she reported on events in Asia, including Typhoon Haiyan that hit Tacloban in the Philippines. Angel tells the story of a young girl, Angel, and her family and their plight to survive this violent and destructive storm.

Daniel has written a thoughtful and compelling story of a girl on the brink of adolescence and her formative experience of natural disaster. Angel lives on the seafront with her mother and father, and her twin brothers. The day after her birthday, a big storm is coming, and while her mother takes her twin brothers to stay inland with their grandparents, Angel stays behind to defend their house with her father.

At times the writing is a little stark and too-direct, laying out details that could be inferred by the reader. Daniel is at her best when she is describing the turbulent scenes of the storm and its aftermath, without worrying about teaching the reader.

This book, and indeed the entire series, match well with the Australian Curriculum in both science and geography, while containing strong enough characters and exciting drama to keep readers interested. Teachers could use this in literature circles to support a science or geography unit, but it could also be recommended to the adventurous reader as well.