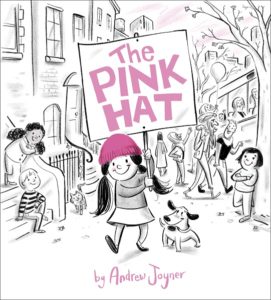 Author/illustrator talks about his new picture book The Pink Hat…

To me, the Women’s March on 21 January 2017 was the way forward. Suddenly, all these women and children and men had built a path to a future that seemed impossible just a day before. I loved its creativity and imagination and intelligence. It was a witty and inventive spectacle that turned something light and whimsical – a knitted, pink, cat-eared hat – into a powerful feminist symbol. Still, at the time I had no idea it would lead to a picture book.

I guess inspiration rarely takes a straight path. The initial spark for The Pink Hat was a conversation with my 14-year-old son about masculinity and role models. In fact, I first imagined the main character as a boy who finds a pink hat and joins the March. But clearly a girl belonged at the centre of the story. As soon as I drew that girl marching in her pink hat, the book started to take shape. She gave the story its power and focus.

There was a reason I dedicated The Pink Hat to ‘all the women who march us forward.’ That’s because I can’t imagine progress without feminism. At a time when the world seemed to be spinning backwards, the Women’s March gave me, and I’m sure many people around the world, hope for our future. So perhaps The Pink Hat is also my way of saying thank you.

Andrew Joyner is an Australian illustrator whose work has graced multiple children’s books, including the Boris series, The Terrible Plop, Too Many Elephants in the House (both written by Ursula Dubosarsky), How Big is Too Small (with Jane Godwin) and 2017’s Blue the Builder’s Dog (with Jen Storer). His authorial picture book debut, The Pink Hat, is a timeless and timely story that celebrates girls and women and equal rights for all.