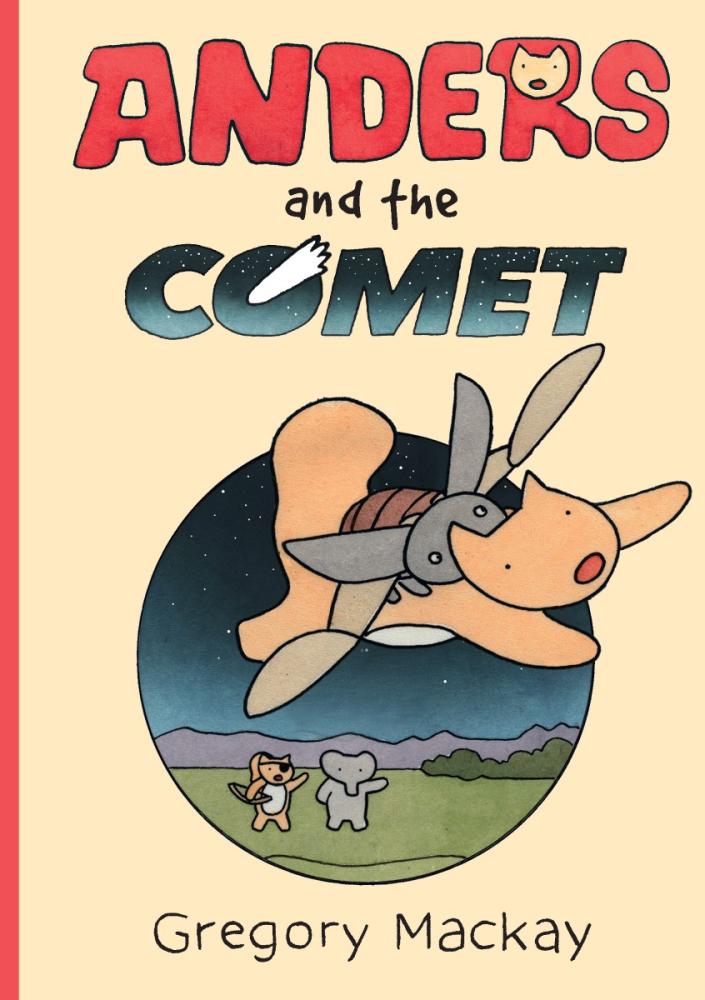 Anders and the Comet begins on the last day of school term with the arrival of a new student, Bernie. Anders immediately befriends Bernie and the two characters, along with Anders’s cousin Eden, embark on a raft of holiday adventures. And what adventures they are – from finding a space observatory in the forest and discovering a comet in the night sky, to flying through the air with a glow-in-the-dark beetle and being whisked away by a windblown jumping castle. The combination of ‘found objects’ with vivid imaginations offers more fun as Anders and Bernie conjure treks through deserts and a journey into space. (A change in panel borders from straight lines to wavy ones alerts readers to flights of imagination.)

While the holiday fun includes some family excursions, Anders, Bernie and Eden have freedom to explore, play and create free of adult supervision. The parents in the story offer their children space and affirmation. In response to this latitude, the children take daring risks, but they are amiably compliant when necessary.

The ungendered characters, drawn in simple outline, depict a variety of animals. Bernie is an elephant; glow-in-the-dark Skip is a beetle; Anders and Eden, with their bushy tails, could be dogs or squirrels. The illustrations are black and white, and the text for each story panel is generally under six words and rarely exceeds a single, short sentence.

With repeat readings of Anders and the Comet, children may sense Bernie’s underlying melancholy and lack of material possessions, or they might notice the fleeting ‘Hi, Mums’ greeting at Eden’s house. They will certainly find room for their own imaginations to expand and they might just discover a yen to create their own comics.

The Anders Comics website includes tips for drawing Anders, as well as a book trailer and a sample of the story.