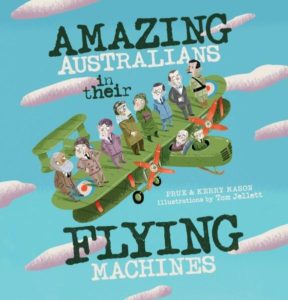 Isolated from the rest of the world, the early settlers of the Australian colonies were inspired to explore a means of travel that would bring them closer to ‘the mother land’, and also allow travel and emergency medical support within their own remote and vast continent. From the drawings of Dr Bland’s Atmotic balloon ship in the 1850s, to formation of the first Australian Flying Corps deployed during World War One, to The Great Race of 1919 from England to Australia organized by the prime minister Billy Hughes, our early aviation history has become an important although less understood part of our national psyche.

Did you know that the first Qantas Airbus A380 passenger plane was named “Nancy-Bird Walton” in honour of the youngest woman pilot to gain her commercial pilot’s license at age nineteen in 1934?

Tom Jellet’s clever and humorous illustrations combined with archival photographs bring the story of these early aviation heroes to life. Written in first and third person narrative, this beautifully presented and well researched picture book for older primary aged children includes a ‘3 Amazing facts’ section and ‘Did you know?’ segment for each pilot. A terrific addition to the home or school library.