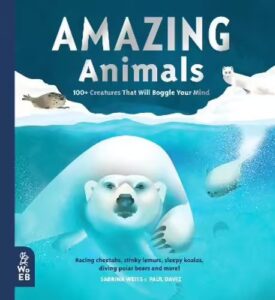 This is an attractive book with clever design features, exquisite illustrations and easily accessible information that pays homage to the weird and wonderful traits and behaviours of animals. The appealing cover design shows an arctic scene in cool colours. We are submerged under the ice and face to face with a polar bear, while a seal and an arctic fox watch on from above. The table of contents covers a diverse range of animals, habitats and habits, and each topic receives a double page spread. In the acknowledgements the author dedicates the book to her mother who inspired and shared her love of animals and who would enquire of the author, “They are amazing, aren’t they?” Amazing is definitely the right word. There are lots of bite-sized intriguing facts in easy-to-understand language, in almost a conversational tone, like being guided on an adventure by a knowledgeable friend.

I particularly like the way the author uses familiar objects as comparisons for animal features such as size, strength, or force. For instance, the horned dung beetle’s strength is equivalent to a 70 kg person carrying the weight of a fully loaded aeroplane on their head, or the froghopper’s jump is like an adult human jumping over a skyscraper. The toucan’s beak is made of keratin like human hair or nails and the zap of an electric eel would take 570 standard batteries to achieve the same force.

When I first picked up the book I wondered if photos would have given a more accurate representation of the animals than drawings, but the stylised illustrations capture a feeling, the essence of the animal, and offer an intimacy that photos can’t achieve. Quite often the creature is looking directly at the reader, evoking an emotional response, or styled to demonstrate the special feature or ability.

There are mini maps throughout to show locations and the centre gatefold is a large map of the world showing the location of some of the animals mentioned in the book. Flaps fold out to give statistics about the biggest or longest living animals, longest migrations and most young produced. I had no idea there was a creature that could potentially live forever! Another clever design element is the way some double-page spreads are turned sideways to demonstrate above and below the surface of the ice or the ground.

There is a handy glossary and index at the back. The glossary is not extensive, as most of the unusual terms are explained within the text. There is however, an extensive sources list which reflects how well the facts have been researched. The tantalising morsels of information throughout could be launching pads for discussion or further exploration, perhaps to other non-fiction texts, websites, images or videos.

This book is part of an “Amazing” series, including islands, rivers, and treasures. I highly recommend this book for home and school libraries and animal enthusiasts of all ages.