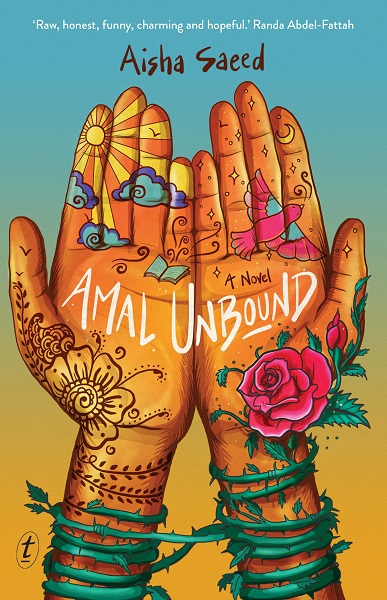 Malala Yousafzai is a name everyone knows, and the readers of Amal Unbound should know for this book is inspired by her experiences and her desire to see young girls – like Amal — educated in Pakistan. The Author’s Note, which should be a foreword, might be better read first to give readers an understanding of the powerful inspiration for Amal’s story.

Amal is a young girl in a small town in Pakistan, who loves to read, loves her family and wants nothing more than to be a teacher. But an incident in a market with a man over a pomegranate, takes readers into the reality of life for girls like Amal, and families like hers that are poor. The man, Jawad Sahib, is the village’s crime lord. He considers her interaction with him a slight against him, and tells her parents that he will take her as a maid in compensation. No one dares stand up against him.

There is no recourse for her family who already owe him money. Her parents are wracked with guilt, but with a family to care for, they have no choice but to send her to the estate where Amal becomes maid to Nasreen Baji. She is kind, and protects Amal from the wrath of her son where she can, but she still keeps her as her maid. As Amal puts it, living in a big house, with a kind woman in a lovely room is still a cage, even though it may be a good looking one.

In the house, Amal meets other servants who have lived there for years, each with their own stories of how they got there. She finds herself the target of a jealous maid – who she replaced – and others who are kind to her. Slowly, she makes friends as much as is possible and in return teaches them to want more than they thought they could have – including teaching other maids to read.

From there, true friendships develop, and together they find the strength to stand up to Jawad Sahib.

Amal Unbound is eye-opening for readers in that it highlights the things we so often take for granted, things that are not available to children everywhere. Amal’s father doesn’t believe Amal should be in school to study to become a teacher one day, because she already knows how to read and write, and that should be enough. She loves him and her family fiercely, but Saeed shows that even those that are kind to girls like Amal, and love them unconditionally, still have their own expectations of what a girl should do.

Saeed tackles tough subjects in an uncompromising way, but there’s a gentleness to her writing that will help young readers empathise with Amal and relate to her desires even if they are worlds apart from those of the reader.