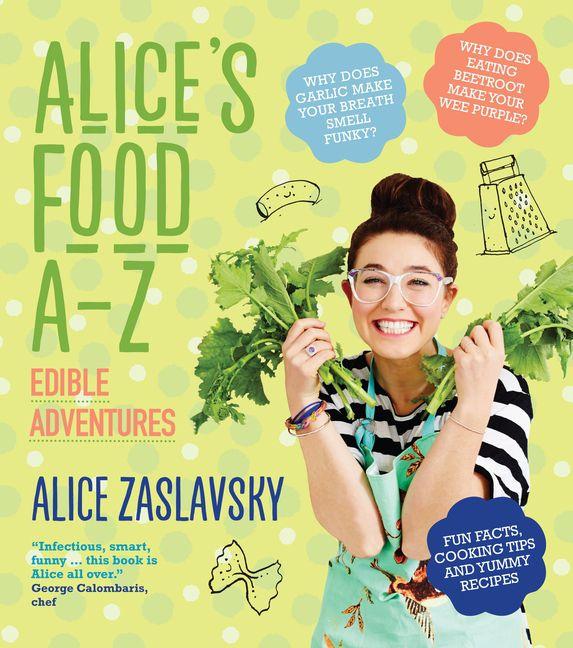 Alice Zaslavsky was born in Georgia (the European one, not the American one) and lived there until she was seven. She is now known in Australia as a former teacher, Masterchef competitor and television presenter. In this colourful, attractive and humorous book, she selects different foods for each letter of the alphabet and provides tips, recipes and facts about each one. There are ‘Whys Guy’, ‘What’s to love’, ‘Snack attack’ and ‘This goes with that’ sections, among others. The excellent photographs and child-centred text (“Why does eating beetroot make your wee purple?”) make this a good introduction to food for upper primary and junior secondary students.

However, the book does have a few issues. Some letters of the alphabet have a particular food described, such as kiwifruit and zucchini, while other sections are far more generalised, such as meat under M and Herbs under H. Therefore the meat section does not have a recipe included (like some other inclusions such as quince) and the table of common cuts is confusing. Some recipes are a surprise for the particular foodstuff and some entries are several pages long while others may take up just one.

Partly because of the conversational tone and colloquial language, there are grammatical mistakes and words which are not standard cooking terms. For example, in the recipe for coconut macaroons, young cooks are told to “smush the mixture onto a lined baking tray”. While readers may be able to guess what this means, it is by no means clear.

Also, there are a few other problems. In the section on mushrooms, Alice talks about going mushroom picking with her parents and she warns readers of the dangers. However the page describing three particular types of mushroom does not have photos of these types for the reader to see. With several recent cases in the news of deaths from eating foraged mushrooms, more definitive pictures may give young readers a clearer idea on how difficult it is to tell safe from dangerous types. Or maybe the suggestion of going mushrooming should have been omitted.

Overall, though, this book is appealing and engaging and may be a great asset for budding young chefs at home or at school.