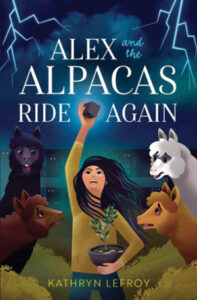 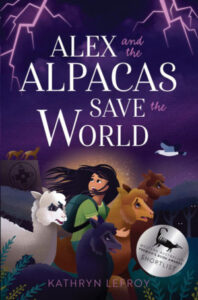 Alex and the Alpacas Save the World and its sequel – Alex and the Alpacas Ride Again – are about Alex who is the Fortieth Sun – the person of the fortieth generation of the Chodzanar tribe – who has the power to do the binding spell that will save the world from the ancient spirit of destruction, Kiala.

The first book introduces the reader to Alex who is astonished to discover her special magical power. With no combat skills and no knowledge of the magical forces she faces, Alex feels unfit for the responsibility to defeat Kiala. Can the alpacas, who embody transformed ancient warriors, help Alex to find the elements for the binding ritual and support her struggle against Kiala? And is her new friend, Leeuie, up to the task of helping her?

In the second book, Alex and the alpacas are again called upon to thwart Kiala who is unexpectedly escaping from her new sapling olive tree prison. Things take a turn for the worse when Alex accidentally releases Kiala’s twin sister, Resila, from the Oroto box that Alex hoped could contain Kiala. With Alex’s magic seemingly diluted and the extra challenge of both ancient spirits on the loose, Alex will need all the help she can get from not only the alpacas and Leeuie, but also Grandpa Jacob and Griffin from the museum, as well as the mysterious American girl who claims to also have magical powers of the Chodzanar tribe.

Although I’m not usually a fan of this type of magical realism genre in these books, I enjoyed the fast-paced, action-packed storyline, the riddles and puzzles to be solved and the vivid descriptions of imaginative, fantasy elements, as well as unexpected twists in the story plot.

I also enjoyed the portrayal of the appealing characters. The talking alpacas are beautiful and brave. Leeuie, is sweet and quirky – always eager to impart his knowledge from watching Discovery Channel documentaries. Alex is a likable, adventurous, independent, feisty, yet flawed protagonist.

These engaging, fast paced, adventure filled stories, with some scary scenarios, are suited to older readers of middle grade novels – about 10-13 years old.