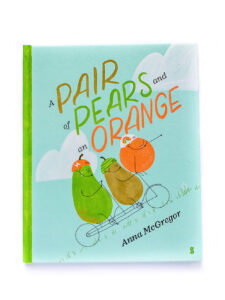 A little while ago a friend was talking to me about some challenges her daughter was having with two friends. She was remarking that she didn’t think that in grade 4 she would have to be dealing with friendship issues that would be causing tears. This wise mum pointed out to me that when you have a group of three, someone is always on the outs, and it can be difficult for those in the midst of a friendship triangle to see what is actually happening and to understand how others are feeling.

A Pair of Pears and an Orange is a stunning picture book that kindly and clearly places just this issue at the centre of a story. Big Pear and Little Pear get along really well. They enjoy doing activities like riding a tandem bike, playing ping pong, and see-sawing. When Orange comes along and wants to join in, Big Pear starts feeling like there is a problem, like she is being “squeezed out”. So, she finds a group of three peas and tries to join in with them, but she just doesn’t fit in the pod. Feeling alone, she decides to try to re-join Little Pear and Orange, who are glad to welcome her back.

This book might appear simple, but the subtle nuances and jokes make it a book that kids will want to return to again and again. Kids know the activities and games featured in the story and will recognise that there are some things that just don’t work with three people, and some things you really do need three people for. The ending is especially clever, as readers can see how they can be welcoming and kind by adjusting to the needs of the group.

The bright, bold, purpose-filled illustrations are typical of books from Scribble; vibrant but not at all garish. The faces of the characters are extremely refined, just eyes and mouth, but that is enough to convey emotion and feeling, without any distraction.

This year my own grade 4 girl, and my preppie for that matter, have had similar triangle-shaped friendship issues. That’s how I know how valuable and insightful this picture book is. The truly masterful thing about A Pair of Pears and an Orange is that it teaches so much about inclusion, friendship, and choice, without ever feeling didactic or preachy. It feels like a hopeful revelation.