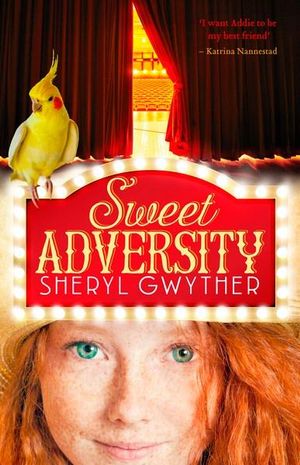 Australia, 1928. Across the country, the Great Depression is beginning to bite. Twelve-year-old Adversity McAllister’s parents manage a theatrical troupe facing hard times. Setting off on a country tour, they leave Addie at the Emu Swamp Children’s Home, planning to collect her on their return. An apparent tragedy, however, sees Addie placed in the permanent care of the cruel and self-serving Matron Maddock. Luckily Addie has her best friend, the acrobatic, Shakespeare-quoting cockatiel, Macbeth, and also many friends among the orphanage staff and children.

Addie has a talent for singing and acting, creating performances to raise the spirits of the children at the home. She also has a talent for trouble. Her impulsiveness, outspokenness and sense of fairness are a repeated challenge to the Matron’s authority. And then Addie uncovers a shocking secret: Matron Maddock has signed a contract selling Addie to the sinister Scrimshaw, ‘employment agent’ and child stealer. He has heard Addie sing, and plans to sell her on for a high sum.

Addie runs away in a horse-drawn caravan, setting off a chain of events through which she learns first-hand about the sometimes dangerous reality of life during the Depression, while holding on to her dreams of home and family.

About ten years in the making, Sheryl Gwyther has said that Sweet Adversity began life as a dream. The novel, however, is solidly grounded in research. The historical period is skillfully evoked – we learn about orphaned and abandoned children during the Depression, life in country NSW and inner-city Sydney, industrial action in the mines, music of the period, and the worlds of Shakespearean theatre and vaudeville. The research, while extensive, is woven in seamlessly, never hindering the narrative. The Depression setting also acts as a catalyst for many of the characters: some rise successfully to the challenges they face; others choose to give in to their worst instincts.

Adversity is a vivid and memorable main character – compassionate, loyal, brave and optimistic. She is a leader who inspires confidence and trust, and who never gives up on her friends and family, or her dreams of belonging. And Macbeth is an appealing sidekick, defending Addie against the villains and providing a pithy Shakespearean quote for every occasion. The Bard is a constant presence in the novel: the chapter titles are drawn from Shakespearean quotes, as is Adversity’s name.

Sweet Adversity is structured in three acts, like a play, and Sheryl Gwyther employs many melodramatic tropes – such as orphaned children, missing parents, sinister villains, coincidences and happy reunions – to good effect. The unscrupulous characters are frightening, but not too frightening for young readers, while also being well-rounded and believable. We are invited to feel compassion for Matron, who has her own story of hardship, while deploring her actions.

The drama and suspense are also successfully handled. The scenes with the elevated birdcage, and the final showdown on the dock with Scrimshaw, are particularly tense. And the conclusion is both moving and very satisfying; truly a case of ‘All’s well that ends well’.

This exciting and heartfelt novel will be very popular with Upper Primary readers who enjoy historical fiction, illuminating a period of Australian history rarely explored in books for young readers. While Sweet Adversity depicts the exploitation and deprivation many children experienced during the Depression, it also celebrates acts of goodness, loyalty and bravery. And in Addie, Sheryl Gwyther has created a courageous, compassionate and appealing character readers will embrace. Here’s hoping for a sequel!