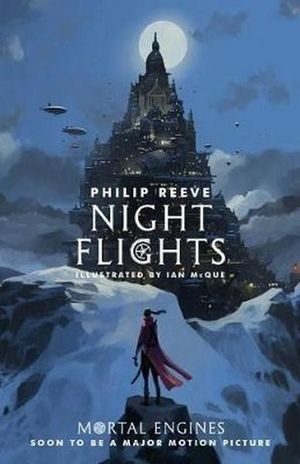 Set in a future Earth of scarce resources, giant roving predator-cities rumble across our depleted planet.  Each of The Traction Cities of the Earth exists only to collect, consume and utilise resources by gulping other towns and their citizens into their mechanical jaws.  Reuse is the only means of survival. The world of Mortal Engines takes recycling to an extreme dystopian edge!

Anna’s story begins as a ‘thrall’, enslaved to work in the dark bowels of the lower tiers of the gritty city of Arkangel. Anna’s engineering knowledge and passion for building airships, coupled with an opportunist outlook, allow her to imagine a life free again.

Anna learns to sharpen her compassion for others into a bold principled spirit. Somehow, she strings opportunities together from various acts of kindness shown to her and channels her power as an agent working against the controllers and repressors.

Even in paperback, this book is stunning to view. Ian McQue’s illustrations are generously woven with Reeve’s text, feeling luxuriously like a graphic novel.  McQue’s monochromatic works feel almost tactile, as if imprinted by the grimy smudge of the smokestacks of the cities. You can almost sense the clanking industrialism and the Steampunk streets of London. Grotesque characters, twisted beasts and monsters, deserted laneways and crumbling infrastructure sit alongside breathtaking vistas of citadels, studded with magnificent airships surrounding the skies. There are poignant renderings of character scenes that create a sense of Victorian poetic beauty too.

At times I felt a word constraint in these shorter stories. As Anna begins to rationalise having to abandon those who had helped her, or having to kill her enemies, I yearned for pages and pages of Reeve’s words describing to me the journey of how Anna’s mind and heart dealt with this. Reeve writes Anna’s inner thoughts so superbly and strongly, but at a few points I felt myself jolted. However, the accessibility of these stories is fantastic for inviting new readers into the Mortal Engines world.

In December 2018, the Mortal Engines film will be in cinemas.  The release of this book is perfect timing for anyone who hasn’t read the series, and to give Mortal Engines fans a taste of the epic film that awaits. However, don’t limit your vision of these stories as a movie lead-in.

Intended as an illustrated version of an existing short story, Reeve explains that he was inspired to expand into three stories about Anna Fang after seeing her character played on screen and talking to Jihae Kim who plays Anna in the forthcoming film.  Knowing that Reeve saw more in Anna in this way, through exploring his own characters through an alternative perspective makes Night Flights feel like a true fan-inspired gift to treasure. Sometimes our favourite characters in a series aren’t the characters the author expected.

Anna Fang is a character so compelling, that the author must tell her stories, because we yearn to hear them.  Anna’s adventures have only just begun!