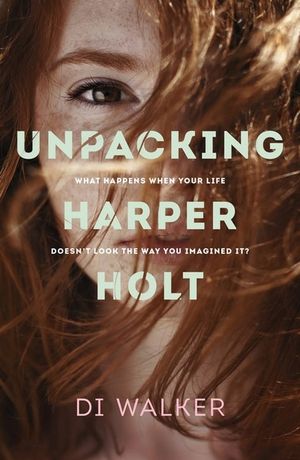 Unpacking Harper Holt follows high school student Harper, as she navigates a shifting sense of what normal life is.   For Harper, it’s normal to move into another new house, as her family frequently relocate due to her parents work.  Having recently moved to a suburb of coastal Melbourne, Harper’s pragmatic approach to finding her way around the neighbourhood is equalled by her approach to the almost predictable social challenges of starting yet another new school. Change and transience is part of life as usual for Harper.

Within a life already dominated by change as part of the pattern of everyday events, Harper must still deal with the wildly unexpected too.  As Harper finds herself on a trajectory of seeing everything through a lens of loneliness and loss, Walker’s writing is truly exceptional. At many times the closing sentence of a chapter was so beautifully expressed that I had to close the book to process the emotion that had been conjured by the scene.

What also stands out in the novel is that it is also a pivotal story of the people around Harper and how the edges and periphery of professional and personal support can blur at times.

I felt that Walker remarkably sheds light on often hidden threads of needing to belong just where you are, as opposed to the usual journey of going somewhere to find yourself.   Although Harper is an extraordinary young woman, able to call repeatedly on an inner strength, to deal with bullying and grief, at times this strength falters.  The raw sting of mistakes is felt because Walker shows us that young adults are in a world of older adult characters who are also often feeling their way into unchartered territory too.  Grasping at the tendrils of normality, everyone struggles with the gravity of impermanence.

This story deals with issues of grief and loss which Walker handles in the story lines in a thoughtful, sensitive and powerful manner.  I could sense Walker’s expertise as a counsellor and teacher within the dialogue.  By weaving hope and a sense of tomorrow into the sadness of trying to make sense out of events that change people forever, Harper’s story is a compelling exploration of complex emotional issues for young adults.