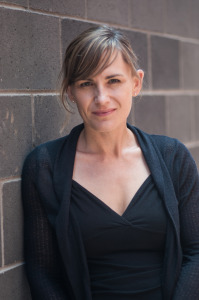 Debut YA author, Catherine Norton, tells Reading Time where she found the inspiration for her novel Crossing, talks about the profession of writing and gives us a peek at her future plans…

It’s the unlikely things in Crossing that are true.  Someone in my family grew up behind the Iron Curtain, and a few small, startling details from her childhood – among them the food shortages, the parents’ mysterious absences – formed the imaginative seed of the novel.  The story itself came to me after I watched a fascinating documentary about the history of the Berlin Wall.  Its evolution, over decades, from simple barbed-wire fence to complex defence system, was paranoia made manifest: it became totalitarianism’s ultimate monument.  Towards the end of the regime, the development, upkeep and defence of the Wall became incredibly costly, and I was astounded that the East German government had directed such a phenomenal amount of energy and resources towards the simple task of keeping the country’s citizens from leaving.  And of course, they couldn’t stop everyone.  As the Wall became more sophisticated, escapees from East Germany became braver and more imaginative; it was one of these remarkable escapes that inspired the basic plot of Crossing.

Fiction writing is an exciting but outlandish enterprise and I find it helps to have small truths to peg inventions on, to anchor them in plausibility.  But I didn’t want to fictionalise anyone’s life, and aside from those small, borrowed details, Crossing is my own invention.

I’m interested in how we each come to form our view of the world.  Childhood is full of transformations: as we become independent of our parents, we inevitably have experiences that contradict the view they’ve passed onto us.  In Crossing, what twelve-year old Cara sees with her own eyes is at odds with the stories she’s been told, and she begins to form her own understanding of the world through her experiences.  This is a dangerous and unsettling process for her, because the authorities in the place where she lives keep a desperate hold on the stories people hear and tell about it, and the consequences are harsh for anyone who questions the official version of things.  The boundaries those authorities police are psychological as well as physical.  ‘You could build a real barrier if you wanted to stop someone from going somewhere,’ Cara observes, ‘but a story could be a barrier too, invisible only just as real.’ She discovers that the journey across either is perilous and scary, but exhilarating too.

There will be a sequel to Crossing thanks to the Max Fatchen Fellowship, which I won at this year’s Adelaide Festival Awards for Literature.  First, though, I have to finish off a creative writing PhD, for which I have written a novel for adults.  I also have a new baby who arrived within a few days of Crossing’s publication, so life is very full of good things.

I love the writing process and will get up before dawn when I can – hard sometimes with a young family – to get a few hundred words down in the quiet.  The most challenging bit for me is pulling the raw material out of the ether.  I find editing easier, but both are rewarding.  I like the work of writing – the sense of achievement as I chip away at a novel, the conscious application of technical skills.  It’s not part of the glamorous myth of writing, but I think we collectively hold an overly romantic view of what it is that writers do, and as a result undervalue what they actually do.  Inspiration plays a part, but any novel represents thousands of hours of doggedness and applied skill – skill that first has to be learnt and practiced.

The learning begins with reading, above all.  I read novels for much older children to my six year old and his grasp of narrative structure is astounding.  Plot, character, generic tropes – these things become wired into us when we read.  It’s a kind of learning by osmosis.  How easy is that?