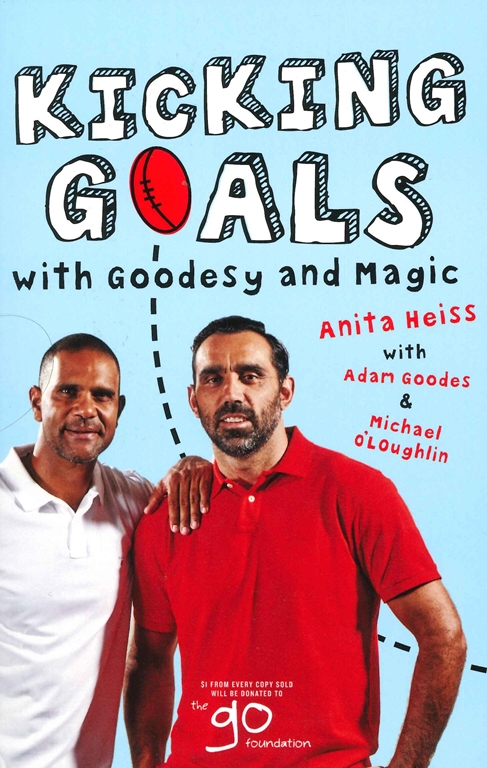 Experienced author, Anita Heiss, has interviewed two of Australia’s most well known and most successful Aboriginal AFL footballers in this book—Adam Goodes and Michael O’Loughlin. Adam Goodes is arguably one of the greatest footballers ever to play, and certainly the best footballer Sydney has known. Goodesy and Magic are lifelong friends, and much of this book is about that friendship. While they share an Aboriginal identity (they are cousins), and high achievement as footballers, the book makes it clear that they are very different people who happen to have built a friendship on the appreciation of those differences. They talk about their early lives, their scrapes at school, their dedication to sport (basketball!).

Michael O’Loughlin makes the point that a strong foundation in a sport requires at least 10,000 hours of practice (historical research into apprenticeship and mastery supports his claim). As a poor kid in an Aboriginal community, cheap footballs were the only really available sports equipment, so football it was.

Adam Goodes sums up the greatest lesson he has learned in life: be present. When we are present we see everything we are supposed to. Interestingly, he still sets himself goals, and re-asseses where he is in relation to his goals every six months.

This is a fascinating and inspiring book, one that many young boys, and especially many young Aboriginal boys and girls would love to have with them to consult as they set their own goals. Anita Heiss has produced an important and useful book. It is worth being aware that one dollar of every purchase of this book goes to the GO Foundation, which provides educational scholarships to indigenous children. Recommended for ten to fourteen year olds.

Ada and the Galaxies