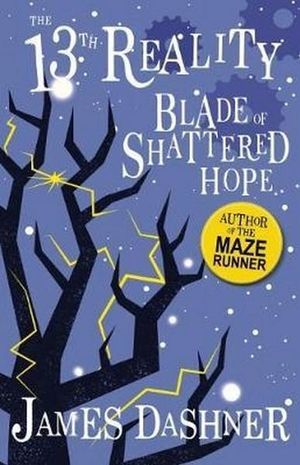 Jumping into an author’s imagined world at Book 3 of a series isn’t an ideal beginning for all readers. However, in this book, that disconcerted feeling that you get when you need to refer to the glossary to understand something, puts you right alongside the characters who are similarly grappling with understanding their own strange universe.

Blade of Shattered Hope, Book 3 in James Dashner’s The 13th Reality series, propels you into Dashner’s richly complex multiverse. Relevant events in the previous two books are explained (and are possible spoilers).  Starting with Book 1 of the series, Journal of Curious Letters would be better for readers who are not comfortable with inferred details told through reflections of the central characters. This is not to say that starting here at Book 3 is missing out. Dashner’s descriptive writing surrounds you in an alternate world.   Sometimes I was wide-eyed and afraid of monstrous creatures, while in other pages moved by vivid imaginings of strange and beautiful landscapes in fantastic universes.

Dashner’s epic face-off in this ‘good kids versus evil grown up’ adventure has plenty of nightmarish mutant monsters and downright creepy scenarios faced by a likeable gang of young human characters.  The story builds into what becomes a terrifying page turner. There is no sugarcoating on the complex layers of good and evil. The murky shadows of conflicting emotion course through the minds of the all The Realitants.  They are a group of young adults who, whether they like it or not, have epic responsibilities. They face choices of life and death.

Dashner’s multiverse of Realities and the central themes in this story are based on theories and concepts in quantum physics.  Scientists still struggle to explain the quantum world in our own reality, and these mind-bending concepts fit neatly into this speculative fiction novel.  Although the concepts are high fantasy, the world of quantum physics is so bizarre, that the fantasy doesn’t seem too far-fetched.   Chi’karda, is the super-force of Dashner’s quantum multiverse and Tick’s mental and physical struggle to wield this power against his arch nemesis Mistress Jane, sits beautifully as a story for young adult readers. Reality really does bite for the young group of Realitants.  They bear the burden of a battle for universes with unexpected personal haunts and twists.

Expanding the science themes into classroom study of quantum physics through the concept of Chi’karda might be too much of a stretch. However, Dashner provides details of his multiverse in a way that could to be a possible link into scientific theories of multiverses in high school physics.  But it is also enough that this is a read for pure imagination, to wander amongst the endless possibilities in the strange laws of the Realities.

Like many middle-of-series books, Blade of Shattered Hope is a bridge to the past and lays a trail for future plot turns. Many questions and loose ends are left unanswered.  Nothing fully concludes, so if you are comfortable feeling a little out of your depth, but can be enjoyably present in the unfolding events, you can read this as standalone from the series.

Blade of Shattered Hope delves into eerie depths. Within the compassionate and complex character relationships, there are acts of disturbing horror and dark cruelty. Dashner’s story is a thrilling and powerful battle of wills, suitable for young adult readers.