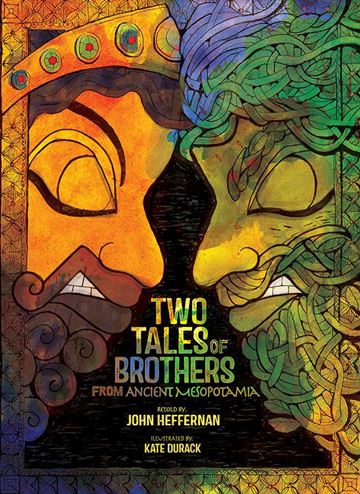 There is nothing like traditional tales for good, gutsy stories with larger-than-life heroes, formidable rivals and great tests of physical prowess, moral fibre and cunning. There is a compelling colour and texture in the myths, legends and sagas of the past, a fact that clearly drives the Christmas Press series of picture book interpretations of traditional stories across different cultures, places and eras. Here, John Heffernan retells two exciting tales from the great Mesopotamian saga, The Epic of Gilgamesh.

The first story, The King and the Wild Man, introduces the semi-divine king Gilgamesh. He is a physically immense, fearsomely brave fellow, bestowed upon the people of the city of Uruk after they implored the gods for protection. However, much to their disappointment, Gilgamesh is obsessed with his power and becomes ‘unspeakably cruel, treating his people as slaves’. And so the people again beseech the gods for help. The divine plan is one of instructive cunning which involves the creation of a ‘wild man’, a rival and foil to the king’s meanness. The inevitable contest has moral lessons for all.

The second story, Brothers Battle the Beast, has Gilgamesh and Enkidu, the wild man, together serve the Uruk people in entering a great dark cedar forest to slay the murderous Humbaba, the Bull of Heaven, a huge hybrid creature that has been terrorising the countryside.

Such stories present a feast for an illustrator. Kate Durack has taken up the opportunity in dazzling style and exquisite skill. Also acting as the book designer, she has used the full parameters of the book pages to deftly create a dynamic depiction of the action that marks the two tales. The spread illustrating the fight with Humbaba is particularly effective and well-executed. Highly recommended for Middle Primary readers upwards.