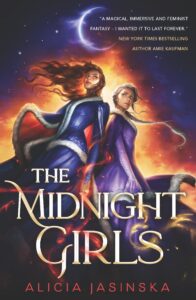 Set in the ice and snow filled world of Lechija (something like 18th century Poland), during Karnawal festive season, the story rotates around the characters of Morning, Midday and Midnight – Beata, Marynka and Zosia who are assistants to the witches, white, red and black jag. Although outwardly they appear as beautiful young women, they are really monsters whose job it is to steal the hearts of princes to feed to their witch mistresses. But this time they have been set a special task. The girls must compete for the prized pure heart of Prince Józel which will make the witch who consumes it much more powerful.

As fancy dress and disguise are integral components of the two-month long festivities the growing competition between Midday and Midnight, both with their own agendas for the Prince’s heart, has allowed the girls to go largely undetected until a battle of powers and egos becomes something more.

Reminiscent of the European fairy-tale tradition, this modern-day fantasy takes the reader on a wild ride through Polish city and countryside in which a magical world meets history and culture of the times. Narrative driven, Jasinska has created a well-paced and engrossing story in which matters around feminism, same sex attraction and good versus evil are raised for consideration although not explored in great depth.

A terrific contemporary take on the traditional fairy-tale this YA novel will appeal to readers aged 14+ years.