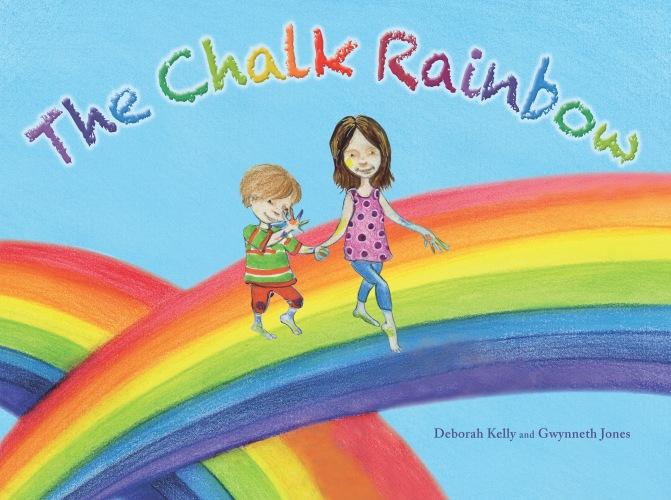 While no mention of autism is made in this story, the main character, Zane displays stereotypical traits that may lead the reader to this conclusion. Told from the perspective of Zane’s sister (whose name is never revealed), The Chalk Rainbow shows how imagination and empathy may be used to solve problems in ways that adults may never consider.

Zane, his sister explains, is different to other kids. He has an invented language, likes to line up his toys and hates anything black. This includes food, clothes, and even black pathways and roads. When his parents respond with anger, or try to explain, Zane falls into a tantrum, curling himself up and refusing to engage.

It is when Zane joins his sister in drawing a chalk rainbow on the front porch that a breakthrough is made. The rainbow leads from the front door, across the black drive way to the front gate. When the chalk runs out, the rainbow doesn’t end – thanks to their chalky, rainbow hands and imaginations, the rainbows continue, all the way across the street, to the playground.

“Soon, there are rainbows everywhere!”.

When Mum and Dad join in, the whole family comes together triumphantly, and the pages are filled with colour and light, transforming the once bleak relationships.

Simply told, and softly illustrated with pastels and watercolours, The Chalk Rainbow is a book for shared storytimes. With gentle messages about acceptance of difference, overcoming fear and family relationships, The Chalk Rainbow is general enough to be accepted as a stand alone story, yet includes enough context to spark more direct conversations. The story is suitable for children aged between 4 and 8 years.

The Teacher’s Notes that are available on the publisher’s website have been prepared by Deborah Kelly and Gwynneth Jones. They include interviews with both author and illustrator, as well as activities for English, Drama and Health. There are also discussion starters about the book in general, addressing concepts including family relationships and fears.