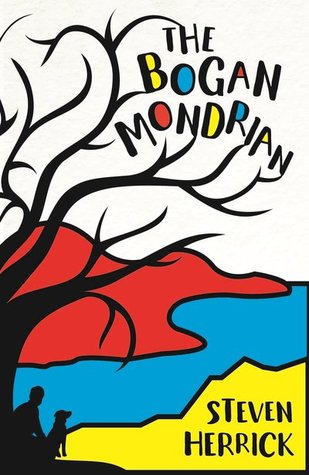 Unlike many of Herrick’s books, this one is not a verse novel. It is a coming-of-age story told in first-person narrative by Luke, a boy who comes from ‘the wrong side of the tracks’. He befriends Charlotte, daughter of wealthy parents who have just moved to the town where Luke lives with his widowed mother. Mother and boy have a loving relationship and are happy together despite their deep grief over Luke’s father’s death.

This is very different to Charlotte’s household where both mother and daughter live in fear of Charlotte’s father’s violent rages. The book makes it clear that class is not a determinant of domestic violence. Charlotte’s father presents a charming face to the public and appears as a benefactor at various school events. Behind the scenes, however, he is very different and Charlotte witnesses many occasions where he beats her mother. In a very distressing scene seen by Luke, Charlotte’s father kills a dog to which Luke has become very attached and that acts as a companion to him when he is out running. Charlotte is at first very reluctant to tell Luke what is going on at home, saying, somewhat enigmatically, that there are far worse things than school. When he learns of what is happening, Luke is at a loss as to how to help. The police, after he finally finds the courage to approach them, while sympathetic, make it clear that the victim of the domestic violence is the one who must report it. Eventually Luke and Charlotte persuade her mother to install some CCTV cameras to record one of the father’s violent outbursts and they then confront him with it, threatening to release it to the partners of his firm if he doesn’t move out and leave them alone. Readers might want to consider if this is the best way of dealing with such violence and whether or not it is really safe. However, it works here and everyone feels a great sense of release from fear when Charlotte’s father complies with their demands.

Luke spends quite some time swimming at the local reservoir and there he meets a sinister figure, a man who smokes, an action which upsets Luke whose father died of lung cancer. He finds that the man makes his living from various nefarious activities but his mistrust and apprehension of the man fade somewhat when he finds that the man knew Luke’s father and greatly admired him. The man is a somewhat mysterious figure who drifts in and out of the action but also acts as a means for Luke to develop new understanding of himself and his past.

This is a story of friendship, of trust, of growing courage, of confronting the ‘demons’ in one’s life and of developing relationships. The characters are nuanced and the dialogue is convincing. The title alludes to Charlotte’s admiration for the Dutch painter Piet Mondrian. It is a somewhat ironic juxtaposition of high art and ‘bogan’ – referring to Luke’s lack of interest in art and being from a working-class background although he comes to admire Mondrian and imitates Charlotte in painting his bedroom in to look like a Mondrian painting. This act is symbolic of the freedom from fear and the growing closeness the pair feel.