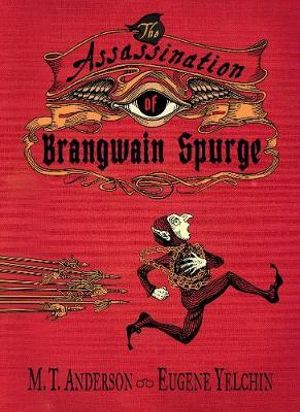 To say that The Assassination of Brangwain Spurge is an unusual book is an understatement. This book is just as fascinating as it is odd, and I hope it finds its way into the hands of intelligent young readers aged 11 and up who have a taste for the unusual and a good sense of humour. It would also make an interesting book for discussion in the classroom on topic of illustration and storytelling, possibly in conjunction with graphic novels.

The story follows the mission of elf historian Brangwain Spurge, who has been sent to the goblin kingdom to deliver a priceless artefact and foster peace and cultural exchange. In the goblin city of Tenebrion, Werfel the goblin Archivist nervously prepares to host the elf ambassador. Nothing can go wrong with this visit, or there will be another devastating war between the elves and the goblins, and nobody wants that, surely?

But, of course, nothing is quite that simple. The story is told through three different strands. We have Werfel’s version of events, told in a familiar third-person narrative. Then there are the detailed illustrations of how Spurge sees things, which he sends back to Elfland as top secret transmissions. There is a third version of events supplied by a series of notes and letters which Lord Ysoret Clives, the elven Spymaster, sends to the King of Elfland. Each thread tells its own story, but between the three, it becomes very apparent that there is much more going on than a simple cultural peace mission.

I found the characters had my attention, interest and sympathy, even when some of them were at their most unlikeable. As Spurge and Werfel began to find common ground and friendship, I took great delight in their interactions and scholarly bickering, and the way they met the challenges in their path. There was a lovely, playful tilt to the language all through the book that balanced beautifully with the artwork and made this story very easy to get into.

I loved the way the three different versions of storytelling wove together, and the way the quirkily gothic illustrations work in counterpoint to the text. Spurge’s images of what he sees happening around him are very different to what Werfel describes of this meeting. Those images start to change both subtly, and then radically, as Spurge begins to question his preconceptions. And the letters written by the Spymaster become more and more revealing as events move on.

This book is also about two unassuming historians who are caught up in history-making events, witnessing another potential war in the making, and it is only when they both put aside their own academic and personal prejudices that they stand a chance of stopping the war from happening.

The underlying themes in The Assassination of Brangwain Spurge centre around preconception and prejudice, and the way these colour, particularly Spurge’s interpretation of the people, places and events he finds himself in the middle of. The further the story gets, the more the reader and Spurge come to realise that everything is very open to interpretation. The title of the book itself is open to more than one meaning. Even Spurge’s name can be seen in different lights – spurge is a type of weed, and the Spymaster constantly refers to Spurge’s childhood nickname “the Weed”, but Werfel points out that “ ‘Those who really know plants never call things weeds. Because each weed has its special, secret uses. Every plant is a treasure to those who know them.’ “

Once Spurge and Werfel get past their respective preconceptions, the two find that they have much in common, and that the divide between elves and goblins is not as great as they had thought. For, as Werfel points out, “We all have the same ears”.