Margaret Hamilton AM, Deputy Chair of the CBCA Board and Awards Foundation Manager, shares her recommendation for late summer reading.

It’s not published yet, but I’ve read a pre-publication copy of Glenda Millard’s new novel for older 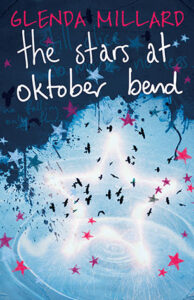 readers. It’s called The Stars at Oktober Bend, to be published by Allen & Unwin in February. Glenda’s writing is always lyrical, tender and very insightful. This book is no exception. When I was finished reading it I was disappointed that I had to leave the characters as I had come to know them very well and cared deeply about them.

A little bit about The Stars at Oktober Bend: Alice is fifteen, with hair as red as fire and skin as pale as bone, but something inside her is broken. She has acquired brain injury, the result of an assault, and her words come out slow and slurred. But when she writes, heartwords fly from her pen. She writes poems to express the words she can’t say and leaves them in unexpected places around the town.

Manny was once a child soldier. He is sixteen and has lost all his family. He appears to be adapting to his new life in this country, where there is comfort and safety, but at night he runs, barefoot, to escape the memory of his past. When he first sees Alice, she is sitting on the rusty roof of her river-house, looking like a carving on an old-fashioned ship sailing through the stars…