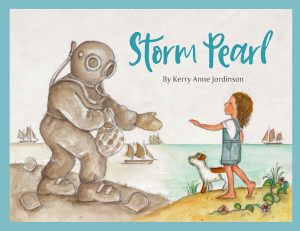 This book is written and illustrated by Kerry Anne Jordinson, who is a Broome-based artist. It tells the story of a small girl, Maggie, visiting her grandmother, whose birthday it is. On the way she falls asleep, something which is indicated only by the illustration showing her sitting with her eyes closed. While she’s asleep Maggie dreams of visiting a ship which she recognises as a pearl lugger and, while there, she meets a man in an old-fashioned diving suit. He seems to recognise her and gives her a shell which she later gives to her grandmother. Inside they find a pearl, a pearl from Maggie’s grandfather.

This is thus a kind of time slip story with the key to Maggie’s journey to the past being her grandmother’s reminiscing about Maggie’s grandfather and his life as a pearl diver and his death when a lugger was lost at sea. In a sense the story comes full circle at the end when Maggie and her grandmother see a fully-rigged sailing lugger passing their house far out to sea.

This is a warm family story but I suspect the time-slip notion will be a little confusing and difficult to grasp for the age of the intended audience.

The book is nicely designed with the a varied layout of full, single-page illustrations and the judicious use of double page spreads – one of which is meant to signify a kind of thought transference between Maggie and the grandfather figure who conveys to Maggie his memories of the wreck of his ship.  There are occasions where the illustrations are a little two-dimensional and could perhaps have added another layer to the story rather than just reflecting the written text.

Included on the back endpaper is an interesting little bit on pearling in Western Australia and how dangerous an occupation it was. The book itself strongly evokes that danger and the effect it could have on families; Maggie’s grandfather is depicted as quite a young man, leaving behind a young widow. The multiculturalism of Broome in the time when this book is set is subtly but effectively conveyed through the illustrations.

Notes for Teachers can be found on the Back Room Press website.