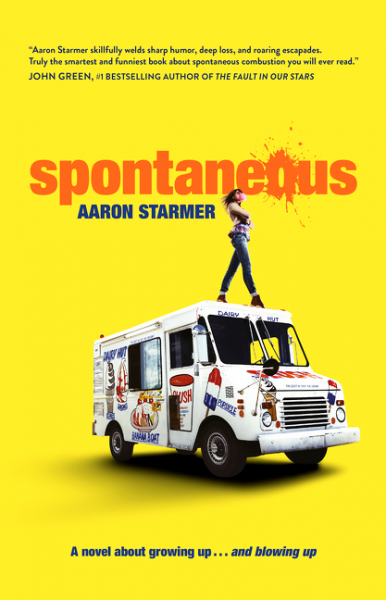 Since Holden Caulfield stole the show from J. D. Salinger, first-person narration has become the key to tone and to success, as a reading experience for the young adult novel. Spontaneous is no exception, and its first-person narrator, Mara Carlyle, in her senior year at Covington High School, is a character who breaks the rules, then breaks them again, always with charm, humour and menace. If you want a narrator who swears so often you stop noticing it, one who takes whatever drugs are circulating that week at the school, goes all the way with her boyfriend and lets you know about it, then Mara is there for you. This is an invigorating ride because it’s not just iconoclastic, not just in-your-face, but smart too, and highly entertaining. And disturbing. No one knows why the senior students in her class are self-combusting, sometimes spectacularly messily over everyone around them. It would be tricky to work out whether there is a greater load of expletives or hemoglobin in this novel. Spontaneous adds mystery to the thrills through Carla Rosetti, a stylish though incompetent FBI agent who might or might not be a role model for young women. I think the novel is suspicious of any idea of role models, and this attitude extends to a very funny scene involving a woman who is President of the United States.

There is nothing but the truth in this novel. Only the explosions are exaggerations (though as metaphors they work to remind us of how commonly we see actually exploded bodies on our televisions every day now). The truth about the teenage mind, teenage impulses and desires, and teenage attitudes to death can make you squirm, might make some readers fearful of their parents getting hold of the book, and will most certainly make you laugh out loud at some point during this novel of brilliant bits that in the end don’t quite come together. Suitable for readers 14 to 17 years, though recommended to parents and teachers too.